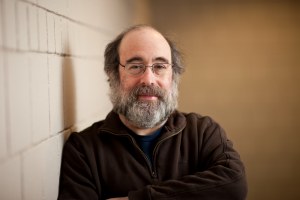 The finding suggests a blood test could serve as a potential screening tool to detect pancreatic cancer – which has the worst prognosis of any cancer type – at an earlier, more treatable stage.

“One of the difficulties in screening for pancreatic cancer is distinguishing it from other conditions, such as diabetes or pancreatitis. There is not a good marker currently that can do that. Ultimately, we need to detect earlier stages of pancreatic cancer that can be operated on and treated. Once the cancer reaches advanced stages, it becomes difficult to treat,” said senior study author David M. Lubman, Ph.D., Maude T. Lane Professor of Surgical Immunology at the U-M Medical School, and a U-M professor of surgery, pathology and chemistry.

In this study, published online in the Journal of Proteome Research, Lubman and colleagues looked at proteins in the blood, and identified one, haptoglobin, that is in fairly high abundance. Haptoglobin is a type of glycoprotein, a category of proteins that has complex chains of sugar groups attached to it. These sugar groups are highly regulated in normal cells but develop a different structure in cancer cells.

Because haptoglobin appears in abundance in serum, it is easy to pull out and isolate from the blood serum with an antibody. The researchers could then look at the structure of the sugar groups from the haptoglobin in the serum using a mass spectrometer, which is a device that separates and identifies molecules based on their molecular weight. They found it was easy to see the changes in the structure of the sugar groups from serum samples of pancreatic cancer versus non-cancerous disease, with distinct changes in structure or the amount of each structure present for each stage of pancreatic cancer versus pancreatitis, diabetes or normal samples.

Researchers are continuing to refine the assay, and are looking to develop a method that would allow them to evaluate hundreds of samples at once. Eventually, they hope this would lead to a test in which patients submit blood samples through their local doctors’ offices, which are then sent to centralized laboratories for processing.

Researchers believe that a similar test could be used for colon and liver cancer, although more work is needed to identify the best markers in those diseases.

The researchers will continue to refine the markers to allow them to better and more reliably distinguish early stage pancreatic cancer. They will also begin testing this approach in larger samples. This test is not available to patients at this time.

Pancreatic cancer statistics: 43,140 Americans will be diagnosed with pancreatic cancer this year and 36,800 will die from the disease, according to the American Cancer Society