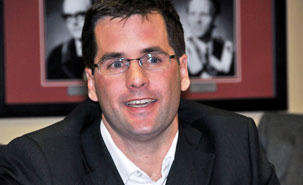 Over the past few years Herceptin® (trastuzumab) has become the standard treatment for this kind of cancer. While it is known that it blocks the activity of this protein, its exact mechanism of action has remained a mystery.

Professor John Stagg, a CRCHUM researcher, Professor Mark J. Smyth, with the Peter MacCallum Cancer Centre in Australia, and their colleagues* have discovered that in addition to blocking cell proliferation, Herceptin also stimulates the production of interferons, which in turn activate immune cells called lymphocytes.

This study further supports the view that the presence of lymphocytes in tumours enhances treatment success. In addition to revealing the precise workings of Herceptin, this study also showed that combining Herceptin with a therapy that stimulates lymphocytes greatly increases its efficacy in animals.

“These findings open another avenue for breast cancer treatment for nearly a third of all women who are affected,” notes Professor Stagg, who is also affiliated with the Faculty of Pharmacy at the University of Montreal and with the Institut du Cancer de Montréal. Clinical trials could get underway in the near future and pave the way for more targeted therapies.

Lymphocytes:
Lymphocytes are white blood cells that play a major role in defending the body against infections.

Interferons:
Interferons are proteins produced by the immune system. Their role is to defend the body against pathogens such as viruses, bacteria, parasites and cancers. They are called interferons because they “interfere” with viral replication in host cells. Among other things, they are responsible for the activation of lymphocytes.

The study was funded by the National Health and Medical Research Council of Australia, the Susan Komen Breast Cancer Foundation and the Victoria Breast Cancer Research Consortium (Australia).