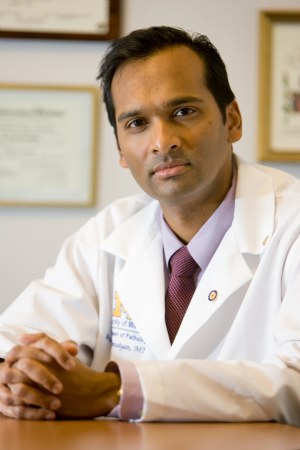 ANN ARBOR, Mich. — About half of prostate cancers have a genetic anomaly that appears to make tumor cells responsive to a new class of cancer-fighting drugs, a new study from the University of Michigan Comprehensive Cancer Center finds.

The drugs, called PARP inhibitors, are currently being tested in breast cancer patients with mutations in the BRCA1 and BRCA2 genes, which are found in up to 10 percent of all breast cancers.

Half of prostate cancers have a genomic rearrangement that causes the fusion of two genes called TMPRSS2 and ERG. This gene fusion, believed to be the triggering event of prostate cancer, was initially discovered in 2005 by U-M researchers led by Arul Chinnaiyan, M.D., Ph.D.

“This type of gene fusion occurs in about 50 percent of prostate cancers, but the genes involved have been notoriously difficult to target therapeutically. We found that instead of targeting the gene fusion product directly, we could block the function of critical interacting partners, such as PARP1,” says Chinnaiyan, a Howard Hughes Medical Institute researcher, director of the Michigan Center for Translational Pathology and S.P. Hicks Professor of Pathology at the U-M Medical School.

Chinnaiyan is the senior author of the current study, which appears in the May 17 issue of Cancer Cell.

“Our studies suggest that the total population of patients who could benefit from PARP inhibition could be significantly expanded,” says Chad Brenner, Ph.D. candidate at U-M, who is the first author on the study.

Working with prostate cancer models in cell lines and mice, researchers found that therapies using the PARP inhibitor Olaparib helped shrink tumors expressing the TMPRSS2:ERG gene fusion and blocked the ability of tumors to spread. Olaparib had no effect on tumors that did not have the gene fusion.

PARP inhibitors are not currently approved by the U.S. Food and Drug Administration, but initial trials in breast cancer patients indicate they can be administered safely and are well-tolerated.

Study authors Maha Hussain, M.D., and Felix Y. Feng, M.D., are currently working on two clinical trials based on these study findings to test if the TMPRSS2:ERG gene fusion could be used as to predict response to treatments, including a PARP inhibitor. These studies are not yet recruiting participants.

Prostate cancer statistics: 217,730 Americans will be diagnosed with prostate cancer this year and 32,050 will die from the disease, according to the American Cancer Society

Disclosure: The University of Michigan has received a patent on the detection of gene fusions in prostate cancer (US 7,718,369), on which Tomlins and Chinnaiyan are co-inventors. The diagnostic field of use has been licensed to Gen-Probe Inc. Chinnaiyan also has a sponsored research agreement with Gen-Probe. Gen-Probe has had no role in the design or experimentation of this study, nor has it participated in the writing of the manuscript.