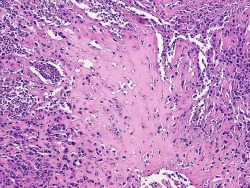 In a study published online in the Journal of Clinical Investigation, researchers looked in ovarian tissue at the mesenchymal stem cells, which are normal cells found throughout the body. These cells can form different specialized cells such as fat, bone or cartilage.

“Cancer is very good at tricking the mesenchymal stem cells into doing what the cancer likes. The cancer takes the cells hostage and uses them to promote the cancer’s growth,” says study author Ronald Buckanovich, M.D., Ph.D., assistant professor of internal medicine and of obstetrics and gynecology at the U-M Medical School.

At the same time, the researchers saw that a type of protein called BMP2 was prevalent in the cancer-associated mesenchymal stem cells. BMP2 is a so-called master regulatory protein, and is carefully regulated in normal cell function. The researchers found more than three times the amount of BMP in the cancer-associated mesenchymal stem cells than in the normal ones. When BMP was added to cancer cells, it led to an increase in cancer stem cells.

The researchers then used a known BMP inhibitor called Noggin, and found that Noggin blocked the mesenchymal stem cells from triggering this cancer stem cell growth.

“High doses of Noggin might not be tolerated in humans,” Buckanovich says. “Our next step is to figure out how to target Noggin directly to the vascular niche where the mesenchymal stem cells and cancer stem cells live. This would allow us to make it safer to use Noggin as a potential treatment for ovarian cancer.”

This research must continue in the laboratory before it can be advanced to clinical trials in patients. In the meantime, the U-M Comprehensive Cancer Center expects to open two new clinical trials within the next year testing other therapies aimed at attacking ovarian cancer stem cells. For information, contact the Cancer AnswerLine at 800-865-1125.

Ovarian cancer statistics: 21,880 Americans will be diagnosed with ovarian cancer this year and 13,850 will die from the disease, according to the American Cancer Society