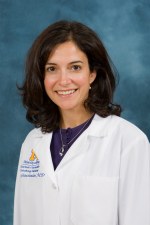 ANN ARBOR, Mich. — Where thyroid cancer patients go for care plays a large role in whether they receive radioactive iodine treatment, a new study from the University of Michigan Comprehensive Cancer Center finds.

While the size and severity of the tumor also played a role in treatment, researchers found unexplained hospital factors had a significant impact on radioactive iodine use.

“What hospital you go to makes a difference in use of radioactive iodine. It doesn’t just matter what the tumor looks like, but where you go for care,” says lead study author Megan Haymart, M.D., assistant professor of internal medicine at the U-M Medical School.

Results of the study appear in the Aug. 17 issue of the Journal of the American Medical Association.

Thyroid cancer is currently one of the 10 most common cancers in the United States and is expected to become even more common in the next decade as more small, early stage cancers are uncovered.

Radioactive iodine following surgery to remove the thyroid is known to be an effective treatment for advanced or high-risk thyroid cancer that is very likely to return. But patients with small, low-risk disease often have an excellent prognosis without radioactive iodine treatment, giving some doctors pause to wonder whether they are submitting patients to unnecessary treatment and risk of side effects.

“For some patients, radioactive iodine is a very important part of treatment, but for others, the risks may outweigh the benefit. We need more studies of this low-risk group of patients to understand what the best treatment course is,” Haymart says.

In the current study, researchers looked at data from 189,219 patients diagnosed with thyroid cancer between 1990 and 2008, as reported to the National Cancer Database, a national database that captures about 85 percent of all thyroid cancers diagnosed in the United States.

Radioactive iodine treatment can have long-term side effects, including risk of a second cancer or damage to nearby tissue such as salivary glands. In addition, safety precautions need to be taken when the treatment is delivered, requiring patients to stay away from young children for a week and avoid becoming pregnant for up to a year after treatment.

Thyroid cancer statistics: 44,670 Americans will be diagnosed with thyroid cancer this year and 1,690 will die from the disease, according to the American Cancer Society