Salk findings may give clinicians a way to detect cancer earlier

LA JOLLA, CA—More than 230,000 women in United States will be diagnosed with breast cancer this year, of which nearly 10% will have mutations in either BRCA1 or 2 genes. The BRCA1 gene and its protein are known to play a powerful role in preventing breast and ovarian cancer development, but just how it does this has long been a debated, even controversial, topic. Now, in the September 8th issue of Nature, researchers at the Salk Institute may have found an answer—and it suggests the differing prevailing theories up to now were all a little bit right.

When BRCA1 is absent, genes which are normally forced to be silent now become activated, “and they are able to do a lot of the things scientists ascribe to mutated BRCA1, which increases risk of cancer,” says Salk research associate Gerald Pao, Ph.D., a study co-lead author. “Cells cannot efficiently repair their DNA, and there are problems with gene transcription and expression, errant cell division and chromosomal instability, among other things.” 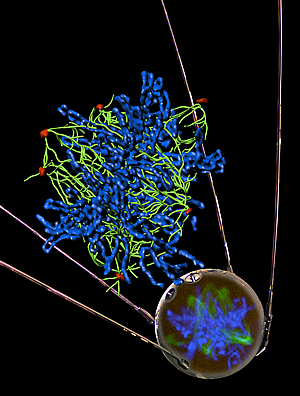 Centrosomes are pictured in red, tublin in green and chromosomes in blue. The “mirrored” image in the Sputnik satellite is a confocal microscopic image.

Center: a mathematical reconstruction of the confocal image to resolve the tubulin fibers and the individual chromosomes.

The scientists discovered that BRCA1 exerts regulatory control over a large number of genes by keeping these DNA bundled together tightly into a structure, known as heterochromatin, inside the nucleus so that it is inaccessible and transcriptionally completely silent. Included within this structure are so-called satellite DNA repeats, a portion of the genome that has long been largely ignored and even considered as “junk.”

“From our findings, we propose that the role of BRCA1 in maintaining global heterochromatin integrity accounts for many of its tumor suppressor functions, and so when this crucial protein is missing, cancer can develop,” Pao says.

“Several years ago our laboratory had shown that BRCA1 protein had an enzymatic activity capable of modifying H2A, a general DNA-packaging-protein. This activity is a hot spot for mutations in human breast cancer patients,” says Inder Verma, Ph.D., the study’s senior investigator. “In the absence of functional BRCA1 protein, H2A is not modified and hence can not bind to the heterochromatin DNA and the transcription of RNAs from the satellite DNAs ensues.

“Our findings might give clinicians a way to detect cancer earlier than is now possible,” he says. “It may be feasible to detect expression of satellite RNA in the blood of patients as an early cancer marker.”

The discovery came after the researchers created a mouse that lacked BRCA1 in the brain and found that its neurons had a defect in the packaging of DNA. The threads of DNA that make up each chromosome has to be severely condensed into packages in order to fit inside a cell’s nucleus. To do this, the DNA is wrapped around spool-like proteins known as histones, and these histones are further compacted together into chromatin. “Every chromosome is packaged into chromatin, and within this chromatin there is heterochromatin, which is even further condensed in order to ensure the genes within are really silent,” says Pao. The researchers discovered in their experimental mice that the heterochromatin was faulty, looser than it should have been.

According to Quan Zhu, Ph.D., the co- lead author of the paper, this structure is situated in the middle of the “X” like shape created when a chromosome duplicates itself just before cell division. That area, known as the centromere, contains a region in which stretches of satellite DNAs are repeated many times over as a way for the cell to recognize the center of the duplicated chromosome. This area is required to pull the chromosomes apart, she says.

Interestingly, the Salk researchers found that satellite de-repression was observed in both mouse and human BRCA1-deficient breast cancers, and that restoration of BRCA1 repressed expression of the satellite genes by about 20-fold. The de-repressed satellite RNAs induced damage to the chromosomes by fusing them inappropriately and breaking them in what is called genomic instability, a catastrophic event for the cell during cell division, which can lead to cancer.

“The issue of what BRCA1 does has been marred in controversy because people kept finding it everywhere, and there was no consistent picture of what it was doing,” says Verma. “We hope this study now provides a new cohesive direction for BRCA1 research so that we can answer the fundamental questions about how this gene promotes cancer and how we might be able to improve early diagnosis and, possibly, treat BRCA1-induced cancer more effectively.”

This work was supported in part by NIH grant R37AI048034 from the National Institute of Allergy and Infectious Diseases, Leducq Foundation, Merieux Foundation, Ipsen/Biomeasure, Sanofi Aventis, and the H.N. and Frances C. Berger Foundation.

About the National Institutes of Health (NIH):
The Nation’s Medical Research Agency includes 27 Institutes and Centers and is a component of the U.S. Department of Health and Human Services. It is the primary federal agency for conducting and supporting basic, clinical and translational medical research, and it investigates the causes, treatments, and cures for both common and rare diseases. For more information about NIH and its programs, visit www.nih.gov.