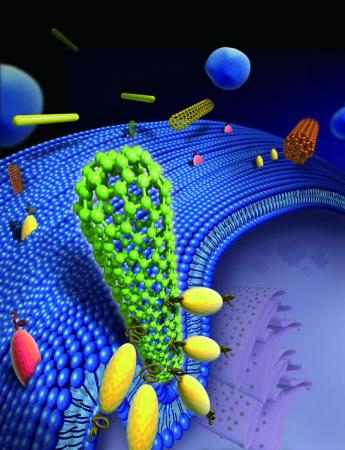 PROVIDENCE, R.I. [Brown University] — It’s been long known that asbestos spells trouble for human cells. Scientists have seen cells stabbed with spiky, long asbestos fibers, and the image is gory: Part of the fiber is protruding from the cell, like a quivering arrow that’s found its mark.

Something perpendicular this way comes Cells ingest things by engulfing them. When a long perpendicular fiber comes near, the cell senses only its tip, mistakes it for a sphere, and begins engulfing something too long to handle. Credit: Gao Lab/Brown University

But scientists had been unable to understand why cells would be interested in asbestos fibers and other materials at the nanoscale that are too long to be fully ingested. Now a group of researchers at Brown University explains what happens. Through molecular simulations and experiments, the team reports in Nature Nanotechnology that certain nanomaterials, such as carbon nanotubes, enter cells tip-first and almost always at a 90-degree angle. The orientation ends up fooling the cell; by taking in the rounded tip first, the cell mistakes the particle for a sphere, rather than a long cylinder. By the time the cell realizes the material is too long to be fully ingested, it’s too late.

“It’s as if we would eat a lollipop that’s longer than us,” said Huajian Gao, professor of engineering at Brown and the paper’s corresponding author. “It would get stuck.”

The research is important because nanomaterials like carbon nanotubes have promise in medicine, such as acting as vehicles to transport drugs to specific cells or to specific locations in the human body. If scientists can fully understand how nanomaterials interact with cells, then they can conceivably design products that help cells rather than harm them.

“If we can fully understand (nanomaterial-cell dynamics), we can make other tubes that can control how cells interact with nanomaterials and not be toxic,” Gao said. “We ultimately want to stop the attraction between the nanotip and the cell.”

Misrecognition
Receptors on the cell’s surface crowd around the nanotube, effectively standing it upright. The cell mistakes the tube for a sphere and begins to engulf it.
Credit: Gao Lab/Brown University

Like asbestos fibers, commercially available carbon nanotubes and gold nanowires have rounded tips that often range from 10 to 100 nanometers in diameter. Size is important here; the diameter fits well within the cell’s parameters for what it can handle. Brushing up against the nanotube, special proteins called receptors on the cell spring into action, clustering and bending the membrane wall to wrap the cell around the nanotube tip in a sequence that the authors call “tip recognition.” As this occurs, the nanotube is tipped to a 90-degree angle, which reduces the amount of energy needed for the cell to engulf the particle.

Once the engulfing — endocytosis — begins, there is no turning back. Within minutes, the cell senses it can’t fully engulf the nanostructure and essentially dials 911. “At this stage, it’s too late,” Gao said. “It’s in trouble and calls for help, triggering an immune response that can cause repeated inflammation.”

The team hypothesized the interaction using coarse-grained molecular dynamic simulations and capped multiwalled carbon nanotubes. In experiments involving nanotubes and gold nanowires and mouse liver cells and human mesothelial cells, the nanomaterials entered the cells tip-first and at a 90-degree angle about 90 percent of the time, the researchers report.

“We thought the tube was going to lie on the cell membrane to obtain more binding sites. However, our simulations revealed the tube steadily rotating to a high-entry degree, with its tip being fully wrapped,” said Xinghua Shi, first author on the paper who earned his doctorate at Brown and is at the Chinese Academy of Sciences in Beijing. “It is counter-intuitive and is mainly due to the bending energy release as the membrane is wrapping the tube.”

The team would like to study whether nanotubes without rounded tips — or less rigid nanomaterials such as nanoribbons — pose the same dilemma for cells.

“Interestingly, if the rounded tip of a carbon nanotube is cut off (meaning the tube is open and hollow), the tube lies on the cell membrane, instead of entering the cell at a high-degree-angle,” Shi said.