The substitution of a single amino acid in a metabolic enzyme can be the cause of various types of cancer. Scientists from the German Cancer Research Center (DKFZ) and Heidelberg University Hospital, collaborating with Bayer AG, have now been able to develop a candidate for an agent that is intended to specifically block the altered enzyme. First studies in mice have demonstrated preclinical effects of this investigational compound. 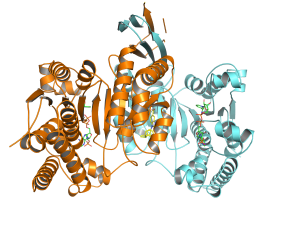 Many malignancies develop as a result of genetic alterations in individual cells. These gene mutations often cause altered proteins that give new, growth-promoting properties to the cell. A prime example for this principle is a cancer-related altered form of the IDH1 enzyme that was initially discovered in certain malignant brain tumors.

Scientists had noticed that mutations in isocitrate dehydrogenase (IDH) 1 almost always occur at position 132 of the enzyme’s chain of amino acids. This replacement causes a specific cancer-promoting metabolic product to accumulate in the cells. Non-mutated IDH enzymes in healthy cells do not produce this metabolite. “This prompted the idea of developing an agent that inhibits position 132-mutant IDH1,” said Stefan Pusch from the German Cancer Research Center (Deutsches Krebsforschungszentrum, DKFZ). He added: “Our goal is to develop a drug that acts on cancer cells while it does not influence healthy cells with the normal enzyme.”

In a research alliance with Bayer AG, the researchers from the DKFZ and Bayer jointly succeeded in finding a substance that is presumed to be highly selective. The investigational compound, called BAY1436032,is currently being examined in comprehensive preclinical tests for its safety and effectiveness.

Leukemia and brain cancer in mice slowed down

The 132 mutation of IDH1 has been found by now not only in various types of brain cancer (oligodendroglioma, diffuse astrocytoma and a smaller portion of glioblastomas) but also in approximately ten percent of acute myeloid leukemias (AML) as well as in bile duct cancer and certain malignant bone tumors. In two currently published studies, the Heidelberg researchers have now demonstrated the preclinical activity of BAY1436032 against AML and brain tumors (astrocytoma) in mice.

Under treatment with BAY1436032, mice that had been transplanted human astrocytoma cells survived significantly longer than untreated fellows. The agent, which can be administered with the food, substantially reduced the levels of the cancer-promoting metabolite in the cancer. “Even at high doses the animals tolerated the treatment well,” said Andreas von Deimling, who is the head of a Clinical Cooperation Unit at the DKFZ and at Heidelberg University Hospital. “BAY1436032 really seems to act specifically on the mutated IDH1 in the cancer cells.”

Tests of the agent against AML were also successful. Mice that had received IDH1-mutant human leukemia cells survived longer when treated with BAY1436032 than untreated animals did. Furthermore, the leukemia stem cells in their bone marrow were significantly reduced. 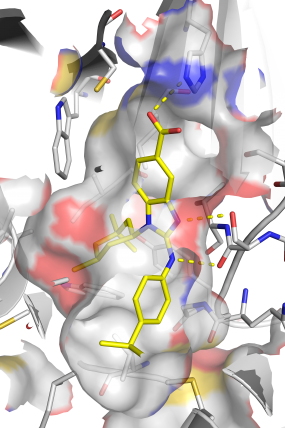 “There is evidence to suggest that BAY1436032 does not act cytotoxic, but may cause tumor cells to mature into normal blood cells instead,” stated hemato-oncologist and scientist Alwin Krämer, who leads a Clinical Cooperation Unit of the German Cancer Research Center and Heidelberg University Hospital. Von Deimling, who led the preclinical study in gliomas, confirmed this observation: “The cancer cells in the mice under investigation lost their dangerous stem-cell characteristics and developed into precursors of normal brain cells”.

As a couple of different mutations at amino acid position 132 of IDH1 are known, the research team also tested the effectiveness of the investigational compound against these mutational variants. In biochemical and cell culture assays, they could show that BAY1436032 is effective against all known mutational variants at position 132. In addition, there are indications that BAY1436032 may be able to cross the blood-brain barrier.

Following these promising preclinical results, a first clinical trial is currently being conducted at the Neurology Department of Heidelberg University Hospital. The trial comprises patients with glioma and other solid tumors with proven IDH1 mutation. The goal is to determine the tolerability of BAY1436032 and the appropriate dose. “Innovative therapies are greatly needed here,” von Deimling said, “because therapy-resistant astrocytomas often turn into highly aggressive tumors that cannot be treated effectively with the drugs that are available at the present time.”

In addition, an international clinical trial led by Alwin Krämer will shortly be launched to study the tolerability and the appropriate dose of BAY1436032 against IDH1 mutant AML.