Drugs that are used in cancer therapy to erase epigenetic alterations in cancer cells simultaneously promote the production of countless mysterious gene transcripts, scientists from the German Cancer Research Center (DKFZ) now report in Nature Genetics. The substances activate hidden regulatory elements in DNA. The unusual gene activity has the potential to stimulate the immune system – a previously unnoticed effect that may increase the effect of therapeutic agents. 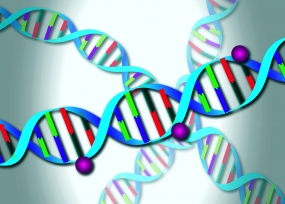 Tumor suppressor genes protect cells from malignant transformation. If they are turned off as a result of chemical modifications in DNA, called epigenetic labels, this contributes to the development of cancer. As opposed to gene mutations, these epigenetic changes are reversible and it is possible to use specific drugs to erase them.

“This has been successfully done for years now in various cancers such as acute myeloid leukemia and myelodysplastic syndrome,” said Christoph Plass from the German Cancer Research Center (Deutsches Krebsforschungszentrum, DKFZ) in Heidelberg. He added that it has also been proven that dangerous labels such as on tumor suppressor genes can be removed in this way. “However, the agents pass over the DNA like a lawn mower and remove practically all labels,” said Plass, who also serves as a research coordinator within the German Cancer Consortium (DKTK). “And so far nobody has studied in detail what effect this has on the tumor cells.”

Plass and his co-workers have now pursued this question in collaboration with colleagues from the U.S.A. Using genome-wide analyses, the scientists discovered that countless mysterious gene transcripts arise in the wake of treatment. This is due to an activation of specific regulatory elements in DNA, called promoters, which have been largely unnoticed so far. “There is total chaos in the treated cancer cells – we hadn’t expected that,” said David Brocks, who is one of the first authors of the study.

A closer look has shown that the activated regulatory elements originate from viruses that inserted themselves into the genome in the ancient past. However, they were turned off in the course of evolution, thus becoming normal components of DNA.

Protein fragments that form on the basis of these peculiar gene transcripts have the potential to be recognized by the immune system and, thus, to stimulate the immune system. This might increase the effectiveness of drugs that are being used. “Now we have to investigate whether this effect can be used specifically to improve therapy,” Plass said. And yet another aspect: “These gene transcripts might be useful as biomarkers to examine whether an epigenetic therapy is effective and reasonable in the individual patient.”

An image for this press release is available at:
http://www.dkfz.de/de/presse/pressemitteilungen/2017/bilder/DNA-Methylierung_Quelle_Schuster_DKFZ.jpg

Note on use of images related to press releases
Use is free of charge. The German Cancer Research Center (Deutsches Krebsforschungszentrum, DKFZ) permits one-time use in the context of reporting about the topic covered in the press release. Images have to be cited as follows: “Source: Schuster, DKFZ”.
Distribution of images to third parties is not permitted unless prior consent has been obtained from DKFZ’s Press Office (phone: ++49-(0)6221 42 2854, E-mail: [email protected]). Any commercial use is prohibited.