Scientists from the German Cancer Research Center (DKFZ), in collaboration with colleagues from Heidelberg University Hospital, have been able to visualize brain cancer using a novel MRI method. They use a simple sugar solution instead of conventional contrast agents, which can have side effects in the body. 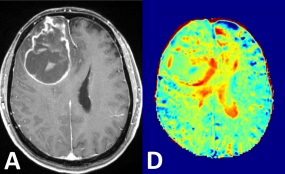 In magnetic resonance imaging (MRI), contrast agents are used to enhance the imaging of tissue structures. While they enhance signals in blood vessels and in spaces between cells, they do not reach the interior of the cell. By contrast, glucose is taken up and then broken down in the body cells. Tumor cells are particularly hungry for glucose in order to feed their high energy needs. By observing glucose metabolism activity it may therefore be possible to identify solid tumors or very aggressively growing tumor areas. Radiologists and physicists from the German Cancer Research Center (Deutsches Krebsforschungszentrum, DKFZ) in Heidelberg have now succeeded in employing this novel type of imaging.

Conventional MRI is based on measuring the signals from protons in water. Since over 60 percent of our body is made up of water, this delivers a clear picture. Glucose is found at much lower levels in our body. In order to make it visible, the DKFZ researchers are therefore using an ultrahigh field scanner with 7 Tesla magnetic field strength and a special method to reinforce the glucose signal distinctly and selectively. This makes it possible to obtain sufficient signal strength in order to visualize changes in glucose levels in brain tissue after injection of a glucose solution.

The underlying physical principle of this method is called magnetization transfer effect. While this effect has been known for decades, it hasn’t been possible so far to use it for glucose imaging in humans. In magnetization transfer, the signal from glucose protons is transferred to bodily water, which is measured in MRI. The effect is proportional to the local glucose level, thus reflecting regional changes in glucose levels. The amount of glucose needed for glucose measuring corresponds to about five sugar cubes.

In the present work, physicist Patrick Schuenke and physician and physicist Daniel Paech have been able to observe the changes of glucose signals in healthy brain regions as well as pathogenic changes in human brain cancer.

For decades now, scientists have used another measuring method, called positron emission tomography (PET), to visualize elevated glucose uptake in tumors. However, this method requires radioactively labeled glucose molecules. “Our glucose MRI does not require any radioactivity and therefore does not involve any radiation exposure for the patient,” said Paech, who is the first author of the publication.

The glucose MRI project is a collaboration of DKFZ scientists from the groups led by Peter Bachert, Mark Ladd and Heinz-Peter Schlemmer. The researchers have pointed out that some questions about the new measuring method still have to be pursued. “We do not know yet how the shares of measured glucose are distributed between vessels and extracellular spaces on the one hand and the cell interior on the other,” said radiologist Heinz-Peter Schlemmer. “If we can confirm that substantial signal levels originate from glucose in the cell interior, this would be important additional information for tumor imaging and functional MRI. This could enhance therapy planning and monitoring.”

Former publications on this topic: