How blood vessels slow down and accelerate tumor growth

Scientists from the German Cancer Research Center (DKFZ) and Heidelberg University have discovered a new mechanism that causes faster sprouting of blood vessels. Cells of a specific type called pericytes, which are attached to the outside of fine blood vessels, are involved in this process. If a particular protein molecule is switched off, this leads to the formation of significantly more, albeit immature, vessels, the scientists now report. As a result, the tumor gets supplied better and can grow faster. 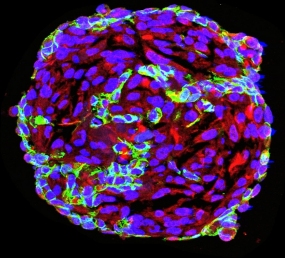 Cancer cells have an enormous need for oxygen and nutrients. Therefore, growing tumors rely on the simultaneous growth of capillaries, the fine branching blood vessels that form a supply network for them. The formation of new blood vessels, called angiogenesis, is therefore a possible target for cancer therapy. Physicians use special inhibitors called angiogenesis inhibitors to “starve” tumors. However, these drugs, which have been in use for more than a decade, have limited effectiveness. Deeper understanding of the underlying mechanisms may help identify further therapy targets in order to prevent vessel formation more effectively.

Hellmut Augustin’s team at the German Cancer Research Center (Deutsches Krebsforschungszentrum, DKFZ) and the University Medical Faculty Mannheim of Heidelberg University has now discovered a new mechanism that promotes the growth of blood vessels in tumors. Pericytes, a type of cells that are attached to the outside of blood capillaries and stabilize them, play a central role in this process; they also influence the growth of blood vessels.

Augustin and his co-workers have discovered that pericytes exhibit a receptor molecule called Tie2 on their surface. If vascular growth factors called angiopoietins attach to the Tie2 receptor, the growth of new capillaries initially stops and existing ones can mature. This controlled growth leads to healthy vessels and, thus, a functioning blood supply system in the body.

The scientists have now succeeded in breeding mice whose pericytes have no Tie2 receptor. In these animals, vascular maturation after birth was slow at first. However, they developed in a normal way and did not exhibit any vascular disorders at adult age. However, if these mice developed tumors, these were pervaded by significantly more blood vessels and, in addition, grew faster than in fellow animals with functioning Tie2 receptor. “Thus, we have proven that Tie2 on pericytes serves as a growth brake for vessels and, hence, also for tumors,” said Laura Milde, who is one of the first authors of the publication.

The article sheds new light on the development of blood vessels. “Up to now, the Tie2 receptor has only been known in endothelial cells that line the inside of blood vessels,” Milde said. “The fact that turning off Tie2 in pericytes accelerates tumor growth so much came as a real surprise to us.”

So far, the function of pericytes has remained largely in the dark. The results obtained by the DKFZ researchers are the first to attribute an important role in tumor development to them. “Drugs that interfere with Tie2 signaling are already in the clinical testing stage,” Augustin said. “The proof that Tie2 on pericytes influences vascular formation in tumors is an important contribution towards developing combination therapies in which the new angiogenesis inhibitors will support the effectiveness of already approved substances.”

An image for this press release is available at:
http://www.dkfz.de/de/presse/pressemitteilungen/2017/bilder/Teichert-et-al-Featured-Image.jpg

Picture Caption: Co-culture of endothelial cells (green) and pericytes (red) results in spheroids which are used to study the interactions of the two cell types in 3D

Note on use of images related to press releases
Use is free of charge. The German Cancer Research Center (Deutsches Krebsforschungszentrum, DKFZ) permits one-time use in the context of reporting about the topic covered in the press release. Images have to be cited as follows: “Source: Milde/DKFZ”.
Distribution of images to third parties is not permitted unless prior consent has been obtained from DKFZ’s Press Office (phone: ++49-(0)6221 42 2854, E-mail: [email protected]). Any commercial use is prohibited.