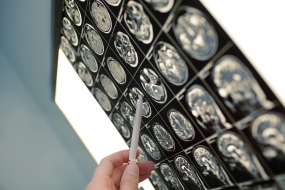 Targeted therapies in cancer medicine are often based on tumor genome sequencing – a technique that makes it possible to identify targets for precision drugs. However, in some cancer types, these structures have not been found to date. This includes ependymoma, a group of brain tumors that are considered to be largely resistant against chemotherapy. Therefore, it would be crucial to find new options for treating them. Ependymoma can affect children as well as adults. In children, it is one of the most frequent types of brain cancer.

In the quest for novel therapeutic approaches in the treatment of ependymoma, a group of scientists from the KiTZ in Heidelberg, collaborating with colleagues of Cleveland Clinic (Ohio, U.S.A.) and the Hospital for Sick Children in Toronto (Canada), have now taken a ‘circuitous route’. Testing an alternative approach, they took a closer look at so-called ‘enhancers’, regions of the genome that regulate the activity of genes, for example by serving as docking sites for regulatory proteins (transcription factors). Groups of enhancers with strong enhancer potential for key cellular processes are also called super enhancers. These have already been linked to tumor development in other cancer types.

“Using various genetic and epigenetic analysis methods to examine 42 ependymoma samples, we were able to identify almost 1700 super-enhancers and assign them to specific molecular groups of ependymoma,” said Marcel Kool, who is a group leader at the Pediatric Neurooncology Division of the German Cancer Research Center (DKFZ) and also works at the KiTZ. “We subsequently demonstrated that many of these super enhancers influence the activity of genes that are implicated in the development of cancer.”

The researchers then took a closer look at the 15 most frequent super enhancers. They were able to demonstrate that these enhancer elements regulate molecules that are involved in key cellular processes and may therefore be used as targets for targeted therapies. “We have thus identified whole new regulatory circuits controlling tumors development in ependymoma. We were able to interrupt these regulatory circuits using specific agents. As a result, the ependymoma cells slowed down their growth and finally died,” said Kristian Pajtler, who is a group leader at DKFZ’s Pediatric Neurooncology Division and a scientist at the KiTZ and he also works as a pediatrician at Heidelberg University Hospital. And Stefan Pfister, head of the KiTZ program “Preclinical Pediatric Oncology”, DKFZ department head and senior physician at Heidelberg University Hospital, sums up: “The research results open prospects of completely new treatment options for children with ependymoma, a group of tumors for which we have lacked good drug-based treatment approaches so far.”

The project was supported by the Sibylle Assmus Foundation’s Neuro-oncology sponsorship prize that had been awarded to Kristian Pajtler.

The „Hopp Children’s Cancer Center at the NCT Heidelberg” (KiTZ) is a joint institution of the Heidelberg University Hospital and the German Cancer Research Center (DKFZ). As a therapy and research center for oncologic and hematologic diseases in children and adolescents, the KiTZ is committed to scientifically exploring the biology of childhood cancer and to closely linking promising research approaches with patient care– from diagnosis to treatment and aftercare. Children suffering from cancer, especially those with no established therapy options, are given an individual therapy plan in the KiTZ, which is created by interdisciplinary expert groups in so-called tumor boards. Many young patients can participate in clinical trials which ensures access to new therapy options. Thus, the KiTZ is a pioneering institution for transferring research knowledge from the laboratory to the clinic.