A molecular map of childhood cancers 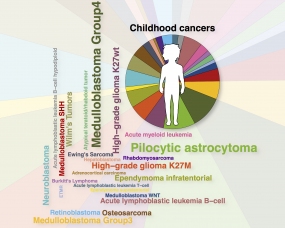 Up to now, comprehensive molecular-genetic data analyses in pediatric oncology have been rare because patient numbers are comparatively small. However, they would be urgently needed in order to further improve the survival rates of children suffering from cancer. About 20 percent of the young patients still die from the disease. In addition, findings concerning cancer in adults cannot be translated readily to children and adolescents.

Charting the genetic repertoire of pediatric cancer
Heidelberg scientists from the KiTZ, in collaboration with colleagues from the DKFZ, DKTK, NCT and Heidelberg University Hospital as well as specialized research teams from the Society for Pediatric Oncology and Hematology (GPOH), have studied the genetic repertoire of childhood cancer. With the goal of identifying novel approaches for diagnosis and treatment of cancer in children, the investigators used the most advanced DNA sequencing technology and comprehensive data analysis to take a very close look at point mutations in DNA as well as larger structural changes in 961 tumors of 24 different types of cancer.

“It turned out in about half of the patients that genetic alterations affected cancer cells so that they are potential targets for so-called targeted anticancer drugs,” said Marc Zapatka,, group leader of Bioinformatics at the Molecular Genetics Department of the DKFZ. Stefan Pfister, scientist at the DKFZ, attending physician at Heidelberg University Hospital and director of the preclinical program at KiTZ, added: “This is a very encouraging result because it means that we might already have agents that target these specific sites and, therefore, might be treatment options for the affected patients.” Pfister continued: “Most of these drugs have not yet been tested for children. It remains to be seen whether they are also safe and effective in young patients.”

In approximately seven percent of all cases, the scientists found genomic alterations that are suspected to have played a role in the development of cancer in these patients. These so-called germline mutations can either be inherited from a parent or form at the very beginning of embryonic development and, therefore, are present in every single body cell of a patient. They are transmitted to the next generation of offspring. Patients with heritable forms of cancer need special attention, because they often need to be treated differently from patients with the same type of cancer who do not have a heritable predisposition.

“Compared to tumors in adults, the investigations revealed large variations in the type and incidence of mutated genes,” said KiTZ associate Lukas Chavez, who worked as a group leader at DKFZ’s Pediatric Neurooncology Department. “This confirms once more that tumor development proceeds in fundamentally different ways in children compared to adults,” Pfister commented. “And it also shows us that we have to go about developing targeted therapies for children differently than for adults. In many cases, we may also need drugs that are specially developed for children.”

The data are freely available on www.pedpancan.com. Colleagues from St. Jude Children’s Research Hospital in Memphis, USA, published further molecular data on childhood cancers along with the Heidelberg study in Nature. Data from both studies are available at St Jude PeCan portal (https://pecan.stjude.org/home). “The two studies, which were developed in close collaboration of all teams, complement each other and together almost entirely cover the molecular diversity of childhood cancers,” explains Pfister. “We believe that the data are a valuable source for pediatric oncology research and can help to improve the cure rates for young cancer patients.”

The German Cancer Research Center (Deutsches Krebsforschungszentrum, DKFZ)
The German Cancer Research Center (Deutsches Krebsforschungszentrum, DKFZ) with its more than 3,000 employees is the largest biomedical research institute in Germany. At DKFZ, more than 1,000 scientists investigate how cancer develops, identify cancer risk factors and endeavor to find new strategies to prevent people from getting cancer. They develop novel approaches to make tumor diagnosis more precise and treatment of cancer patients more successful. The staff of the Cancer Information Service (KID) offers information about the widespread disease of cancer for patients, their families, and the general public. Jointly with Heidelberg University Hospital, DKFZ has established the National Center for Tumor Diseases (NCT) Heidelberg, where promising approaches from cancer research are translated into the clinic. In the German Consortium for Translational Cancer Research (DKTK), one of six German Centers for Health Research, DKFZ maintains translational centers at seven university partnering sites. Combining excellent university hospitals with high-profile research at a Helmholtz Center is an important contribution to improving the chances of cancer patients. DKFZ is a member of the Helmholtz Association of National Research Centers, with ninety percent of its funding coming from the German Federal Ministry of Education and Research and the remaining ten percent from the State of Baden-Württemberg.

The „Hopp Children’s Cancer Center at the NCT Heidelberg” (KiTZ)
The „Hopp Children’s Cancer Center at the NCT Heidelberg” (KiTZ) is a joint institution of the Heidelberg University Hospital and the German Cancer Research Center (DKFZ). As a therapy and research center for oncologic and hematologic diseases in children and adolescents, the KiTZ is committed to scientifically exploring the biology of childhood cancer and to closely linking promising research approaches with patient care– from diagnosis to treatment and aftercare. Children suffering from cancer, especially those with no established therapy options, are given an individual therapy plan in the KiTZ, which is created by interdisciplinary expert groups in so-called tumor boards. Many young patients can participate in clinical trials which ensures access to new therapy options. Thus, the KiTZ is a pioneering institution for transferring research knowledge from the laboratory to the clinic.