Delays in blood cancer diagnosis could be avoided, study finds

Many patients with lymphoma take longer to be diagnosed than expected, with some thinking these delays could have been avoided, a new report from the University of York has found. 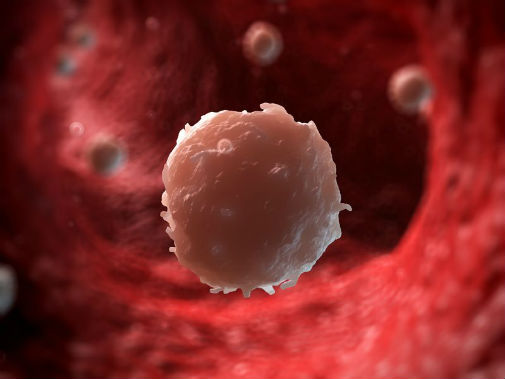 Lymphoma is a cancer of the white blood cells

Many symptoms reported by patients are not included in UK referral guidance, a document available to help GPs identify suspected lymphoma.

Current guidance focuses on the most common signs such as swollen lymph nodes, weight loss and night sweats, but many patients experienced a wider range of symptoms.

There are almost 16,000 cases of lymphoma – malignancies of the blood forming system – in the UK each year. The 10 year survival rate for Hodgkin’s lymphoma is 80%, but only 63% for non-Hodgkin’s. Early symptoms of lymphoma are notoriously difficult to interpret: patients may not recognise them as being significant and GPs may not appreciate their seriousness

In a study, involving Dr Debra Howell from the University of York’s Department of Health Sciences and colleagues fom Hull York Medical School, 35 patients with lymphoma and 15 of their relatives were interviewed to obtain details of how the disease first came to light, how they reacted to symptoms, and how they were diagnosed.

Early symptoms were frequently non-specific, such as feeling tired or lacking concentration, or experiencing vague pains or discomfort, and were attributed by both patients and doctors to benign and self-limiting causes. Routine blood tests, even when abnormal, often did not point to a precise diagnosis.

The authors acknowledge the difficulty of dealing with this by patient education campaigns but highlight the crucial role of what is known as ‘safety netting’ by GPs, meaning that unexplained symptoms are not ignored, and patients are not dismissed with an ‘all clear’ diagnosis, but are given precise information about returning to the GP for further tests should symptoms persist. Patients need to be reassured that repeated help-seeking is not only justified but may be essential.

The study was carried out by the Haematological Malignancy Research Network (HMRN), a collaboration between doctors and nurses at 14 hospitals across Yorkshire and the Humber. HMRN was established to produce evidence to improve patient care.

One of the study authors, Professor Russell Patmore – a haematology consultant at Castle Hill Hospital in Hull and visiting honorary professor at the University of York, said: “It can be very difficult for GPs to decide when relatively common symptoms, such as tiredness or infections, could potentially indicate lymphoma. If the cause of symptoms is uncertain, it is important that strategies are put in place to encourage patients to talk to their GP about this, particularly if the problem is getting worse.”

Dr Alasdair Rankin, Director of Research and Patient Experience at Bloodwise, said: “Patients and GPs can easily put the symptoms of blood cancers like lymphoma down to the ageing process or harmless conditions. It’s vital that GPs are made aware of the signs that could indicate blood cancers and that patients are reassured that it’s OK to keep seeking help if they continue to experience unusual, ongoing or unexplained symptoms.”

Dr Richard Roope, Cancer Research UK’s GP expert, said: “This research highlights that lymphomas often present with non-specific symptoms, which could also be signs of less serious illnesses. This creates a challenge for both patients and GPs. ​On average a GP will only see a new case of lymphoma once every three years, and during that time will have around 24,000 consultations.

“NICE guidelines are helpful in suggesting which symptoms should be properly evaluated such as enlarged lymph glands, particularly if these are accompanied by other symptoms such as persistent tiredness or unexplained weight loss, fever, shortness of breath or night sweats. Another challenging aspect is that blood tests will often be normal in patients with lymphoma.

“The Royal College of General Practitioners, in collaboration with Cancer Research UK, run education events for GPs and some of these cover the blood cancers, to raise awareness of the importance and significance of blood cancers, and equipping colleagues with the information and systems to enable earlier diagnosis.”