In order to gain enough energy for their rapid growth, glioblastoma cells reprogram their fatty acid metabolism. How they do this has been unclear until now. Researchers at the German Cancer Research Center in Heidelberg have now discovered that a protein called ACBP (acyl-CoA-binding protein) enhances the transport of fatty acids into the mitochondria. This provides glioblastoma cells with the necessary energy source for their rapid growth. This discovery is not only scientifically relevant, but may also offer new therapeutic approaches for an aggressive tumor with a poor prognosis. 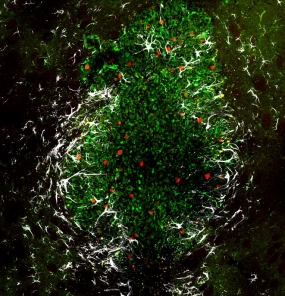 Although intensive research has been carried out for a long time, glioblastoma is still one of the most dangerous of all tumors today. The life expectancy of those affected is often just one year after diagnosis.

In order to grow so aggressively and rapidly, glioblastoma cells need a great deal of energy, which they mainly obtain from an altered fatty acid metabolism. If they are deprived of this way of generating energy, the growth of cancer cells slows down.

This thought led the scientists at the German Cancer Research Center (DKFZ) to investigate the production of a cell protein called acyl-CoA-binding protein (ACBP) in mice. The researchers found that ACBP apparently controls the availability of fatty acids in the mitochondria, the “power plants of the cell”. So what would happen if ACBP was switched off?

“In our mice, we succeeded in genetically switching off ACBP completely from the tumor. This led to a longer survival of the animals because the tumor had less energy at its disposal and was therefore less able to grow,” says Julieta Alfonso from the DKFZ in Heidelberg, the senior author of the study.

In several preclinical models the authors of this study could now show that ACBP blockade deprives glioblastoma cells of their fatty acid supply and thus their energy source, resulting in a slower growth rate of tumor cells and, accordingly, increased survival time of the mice.

“Our study reveals a critical link between fatty acid metabolism and the aggressive growth of glioblastoma. In the future, ACBP could possibly represent a new therapeutic target for the treatment of this poorly treatable type of cancer,” concludes Alfonso.

However, the scientist points out that many questions still have to be clarified: So far, there is no drug available that inhibits the activity of ACBP. Therefore, the scientists are currently unable to make any statements about the side effects of ACBP inhibition in the entire body.

A picture is available for download:
www.dkfz.de/de/presse/pressemitteilungen/2019/bilder/Brain-Tumor-in-mouse.jpg
Caption: Tissue sample from a mouse brain showing a tumor generated from human glioblastoma cells. In green, tumor cells expressing EGFP, in red the proliferation marker Ki67 and in white the astrocyte marker GFAP.

Note on use of images related to press releases
Use is free of charge. The German Cancer Research Center (Deutsches Krebsforschungszentrum, DKFZ) permits one-time use in the context of reporting about the topic covered in the press release. Images have to be cited as follows: “Source: J. Alfonso/DKFZ”.
Distribution of images to third parties is not permitted unless prior consent has been obtained from DKFZ’s Press Office (phone: ++49-(0)6221 42 2854, E-mail: [email protected]). Any commercial use is prohibited.