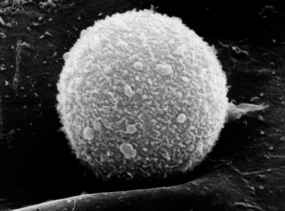 It is vital that the body’s own immune system does not overreact. If its key players, the helper T cells, get out of control, this can lead to autoimmune diseases or allergies. An immune system overreaction against infectious agents may even directly damage organs and tissues.

Immune cells called regulatory T cells (“Tregs”) ensure that immune responses take place in a coordinated manner: They downregulate the dividing activity of helper T cells and reduce their production of immune mediators. “This happens through direct contact between regulatory cell and helper cell,” says Prof. Peter Krammer of DKFZ. “But we didn’t know yet what this contact actually causes in helper cells.” The researchers’ hypothesis was that the contact with the Tregs affects certain steps in the complex signaling cascade that leads to the activation of the helper T cells.

If the T cell receptor, a sensor molecule on the surface of helper cells, senses foreign or damaged protein molecules, this will trigger a cascade of biochemical activation reactions. At the end of this signaling cascade, genes that are required for an immune attack will be read in the nucleus of helper cells.

Jointly with colleagues from several German research institutes, Peter Krammer, Angelika Schmidt and co-workers have now compared the signaling cascades in helper cells with and without contact to Tregs. The immunologists found out that a short contact of the two types of cells in the culture dish is sufficient to suppress the helper cells. Following Treg contact, the typical release of calcium ions into the plasma of helper cells does not occur. As a result, two important transcription factors, NFkappaB and NFAT, do no longer function. They normally activate genes for immune mediators, thus alerting the immune system.

“The mode of action of Tregs is of great importance for cancer medicine. Many of our colleagues have shown in various types of cancer that Tregs can downregulate the immune response against tumors so that transformed cells escape the immune defense. This can contribute to the development and spread of cancer. We are therefore searching for ways to reactivate such suppressed helper cells,” said Krammer, explaining the goals of his work. For developing immune therapies against cancer it is also crucial to understand how Tregs work. The researchers are trying to prevent that immune cells which have been painstakingly activated against cancer in the culture dish are immediately suppressed again by Tregs.