In children with glioblastoma, Heidelberg scientists have now discovered genetic alterations that affect the function of DNA packaging proteins known as histones. In a cell, histones serve as coils around which the DNA wraps. At the same time, histones regulate gene activity. Mutations in histone genes have never before been tied to a disease. The group comprising scientists of the German Cancer Research Center, Heidelberg University Hospitals and McGill University in Canada have now reported their findings in Nature. 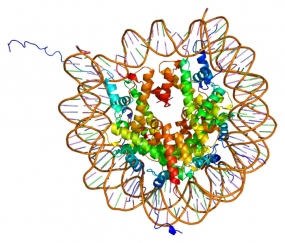 Glioblastomas grow extremely aggressively into healthy brain tissue and, moreover, are highly resistant to radiation therapy and chemotherapy. Therefore, they are regarded as the most malignant type of brain tumor. Currently available treatment methods are frequently not very effective against this type of cancer. Glioblastoma can affect people of all ages, but is less common in children than in adults.

In order to gain a better understanding of the molecular processes involved in the development of such tumors and, in this way, be able to develop novel treatment approaches, an international research team has now deciphered the genetic material of 48 pediatric glioblastomas. Project leaders have been Dr. Stefan Pfister of the German Cancer Research Center (Deutsches Krebsforschungszentrum, DKFZ) in Heidelberg, Germany and Nada Jabado of McGill University in Montreal, Canada.

In almost one out of two cases the team discovered genetic alterations that affect certain proteins known as histones. These are the proteins around which the DNA molecule, a thread of several feet, coils inside cells. In some cases it was the histone genes themselves that were found altered, in other cases the alterations affected the genes coding for two other proteins that assist in wrapping the DNA around the histone coils.

The histone mutations are most prevalent in pediatric tumors (36 percent), while in adult glioblastoma they occur only very rarely (3 percent) and were not found at all in less aggressive brain tumors.

Histones are evolutionary highly conserved proteins which are much the same in man, mouse or threadworm. Up until recent years, histones were believed to be little more than DNA packaging material. However, by now it is known that they also determine which genes are read and which are not read; thus, they actively participate in regulating cell functions. A multitude of chemical tags at specific positions of a histone determine whether or not a gene can be accessed.

“The mutations we discovered tend to affect particularly those regions of the histone that regulate gene activity. Therefore, tumor cells with histone mutations have an altered gene activity profile,” says Stefan Pfister, who is a pediatrician and molecular biologist, and he further explains: “We have discovered the first histone mutation that is implicated in a disease. A single small histone defect can result in major changes in gene activity and, moreover, affect a cell’s life span – these two effects together can lead to cancer.”

A treatment approach known as epigenetic therapy, which influences the chemical tags of histones, is already being tested for the treatment of other types of cancer. The doctors and scientists of Pfister’s department will now investigate whether these drugs may also be effective against glioblastoma with histone defects.

This research project was funded by the German Ministry of Education and Research (BMBF) and German Cancer Aid (Deutsche Krebshilfe e. V.) as part of the funding of the German “PedBrain Tumor” project within the International Cancer Genome Consortium (ICGC) (€15 million over a 5-year period).