Death rates from all cancers combined for men, women, and children continued to decline in the United States between 2004 and 2008, according to the Annual Report to the Nation on the Status of Cancer, 1975–2008. The overall rate of new cancer diagnoses, also known as incidence, among men decreased by an average of 0.6 percent per year between 2004 and 2008.  Overall cancer incidence rates among women declined 0.5 percent per year from 1998 through 2006 with rates leveling off from 2006 through 2008. 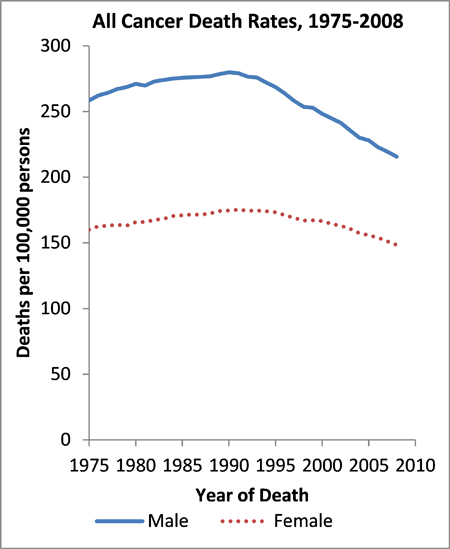 The report is co–authored by researchers from the Centers for Disease Control and Prevention, the North American Association of Central Cancer Registries, the National Cancer Institute, and the American Cancer Society. It appears early online in the journal CANCER, and will appear in print in the May issue.

The special feature section highlights the effects of excess weight and lack of physical activity on cancer risk. Esophageal adenocarcinoma, cancers of the colon and rectum, kidney cancer, pancreatic cancer, endometrial cancer, and breast cancer among postmenopausal women are associated with being overweight or obese. Several of these cancers also are associated with not being sufficiently physically active.

“This report demonstrates the value of cancer registry data in identifying the links among physical inactivity, obesity, and cancer,” said CDC Director Thomas R. Frieden, M.D. “It also provides an update of how we are progressing in the fight against cancer by identifying populations with unhealthy behaviors and high cancer rates that can benefit from targeted, lifesaving strategies, and interventions to improve lifestyle behaviors and support healthy environments.”

For more than 30 years, excess weight, insufficient physical activity, and an unhealthy diet have been second only to tobacco as preventable causes of disease and death in the United States.  However, since the 1960s, tobacco use has declined by a third while obesity rates have doubled, significantly impacting the relative contributions of these factors to the disease burden.  Excess weight and lack of sufficient physical activity have been linked to increased risk of cardiovascular disease, hypertension, diabetes, and arthritis, as well as many cancers.

“In the United States, 2 in 3 adults are overweight or obese and fewer than half get enough physical activity,” said John R. Seffrin, Ph.D., chief executive officer of the American Cancer Society. “Between children and youth, 1 in 3 is overweight or obese, and fewer than 1 in 4 high school students get recommended levels of physical activity. Obesity and physical inactivity are critical problems facing all states. For people who do not smoke, excess weight and lack of sufficient physical activity may be among the most important risk factors for cancer.”

The Report to the Nation was first issued in 1998. In addition to drops in overall cancer mortality and incidence, this year’s report also documents the second consecutive year of decreasing lung cancer mortality rates among women. Lung cancer death rates in men have been decreasing since the early 1990s.

“The continued declines in death rates for all cancers, as well as the overall drop in incidence, is powerful evidence that the  nation′s investment in cancer research produces life–saving approaches to cancer prevention, screening, diagnosis, and treatment,” said NCI Director Harold E. Varmus, M.D.  “But, it is also important to note that investments we make today are critical if we hope to see these declines in incidence and death from cancer reflected in future Reports to the Nation.” 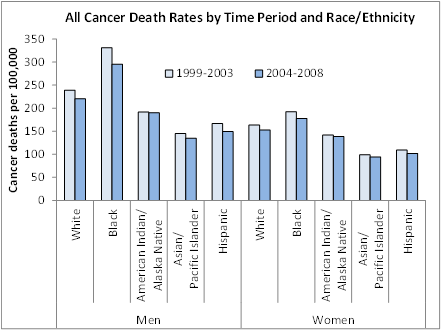 Among children aged 19 years or younger, cancer incidence rates increased 0.6 percent per year from 2004 through 2008, continuing trends from 1992, while death rates decreased 1.3 percent per year during the same period. These patterns mirror longer–term trends.

Among racial and ethnic groups, the highest cancer incidence rates between 2004 and 2008 were among black men and white women. Cancer death rates from 2004 through 2008 were highest among black men and black women, but these groups showed the largest declines for the period between 1999 and 2008, compared with other racial groups. The differences in death rates by racial/ethnic group, sex, and cancer site may reflect differences in risk factors, as well as access to and use of screening and treatment.

“While the sustained decline in cancer mortality rates is good news, the persistence of disparities among racial and ethnic groups continues to concern us,” said Betsy A. Kohler, executive director of NAACCR. “The collection of comprehensive cancer surveillance data on all patients may provide clues to understanding these differences and addressing them.”

The report notes that continued progress against cancer in the United States will require individual and community efforts to promote healthy weight and sufficient physical activity among youth and adults.

To view the full Report, go to http://wileyonlinelibrary.com/journal/cancer–report2012

For a Q&A on this Report, go to www.cdc.gov/cancer/dcpc/research/articles/arn_7508qa.htm

For Spanish translation of this press release, go to http://www.cdc.gov/spanish/CDC_servicio/2012/p0328_Cancer_tasasmuertes.html

For Spanish translation of the Q&A, go to www.cdc.gov/spanish/cancer/dcpc/research/articles/arn_7508qa.htm

CDC works 24/7 saving lives, protecting people from health threats, and saving money through prevention. Whether these threats are global or domestic, chronic or acute, curable or preventable, natural disaster or deliberate attack, CDC is the nation′s health protection agency.

The American Cancer Society saves lives and creates a world with less cancer and more birthdays by helping you stay well, helping you get well, by finding cures and fighting back. As the nation′s largest non–governmental investor in cancer research, contributing about $3.4 billion, we turn what we know about cancer into what we do. To learn more about us or to get help, call 1–800–227–2345 or visit www.cancer.org

The National Cancer Institute (NCI) leads the National Cancer Program and the NIH′s efforts to dramatically reduce the burden of cancer and improve the lives of cancer patients and their families, through research into prevention and cancer biology, the development of new interventions, and the training and mentoring of new researchers. For more information about cancer, please visit the NCI Web site at http://www.cancer.gov

The North American Association of Central Cancer Registries, Inc. (NAACCR, Inc.), is a professional organization that develops and promotes uniform data standards for cancer registration; provides education and training; certifies population–based registries; aggregates and publishes data from central cancer registries; and promotes the use of cancer surveillance data and systems for cancer control and epidemiologic research, public health programs, and patient care to reduce the burden of cancer in North America.