Like a guided missile, the antibody carries its poisonous load to target cancer cells. The poison-loaded antibody arrested the growth of various types of cancer cells in the culture dish and even caused the complete disappearance of transplanted pancreatic tumors in experimental mice. 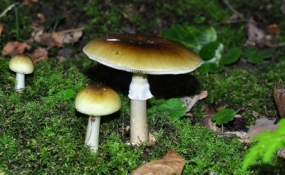 The mere thought of an identification error sends a chill down the spine of any mushroom lover: The death cap mushroom (Amanita phalloides), which resembles the common white button mushroom, contains one of the most deadly poisons found in nature, α-amanitin. This substance kills any cell without exception, whether it be healthy or cancerous. At the German Cancer Research Center (Deutsches Krebsforschungszentrum, DKFZ) and the National Center for Tumor Diseases Heidelberg, immunologist Dr. Gerhard Moldenhauer, jointly with biochemist Professor Dr. Heinz Faulstich, Max Planck Institute for Medical Research, has now developed a method for destroying cancer cells using the dreaded fungal toxin without harming the body.

The trick to accomplish this is to deliver the poison directly to the right address in the body using something that virtually serves as a cab. In this case, the cab is an antibody whose highly specific arms attach to a cancer-typical cellular surface protein called EpCAM. The fungal toxin is linked to the antibody in a stable chemical conjugation.

In the culture dish, the poison-loaded antibody arrested the growth of pancreatic, colorectal, breast and bile duct cancer cell lines. In mice bearing transplanted human pancreatic cancer, a single antibody injection was sufficient to inhibit tumor growth. Two injections of higher doses of the antibody even caused complete tumor regression in 90 percent of the animals. Even the higher doses did not cause any poison-related damage to the liver or other organs of the animals.

EpCAM, the protein chosen by the Heidelberg immunologists as the tumor cell recognition structure, is a characteristic membrane protein of epithelial cells. This type of cells lines all inner and outer surfaces of the body. Most malignant tumors originate from such epithelial tissues. Many of these, such as pancreatic cancer, breast and ovarian cancers, bile duct carcinomas and tumors of the head and neck, produce too much EpCAM – and this is frequently associated with an extremely poor prognosis of the disease. EpCAM is therefore considered a suitable target structure for attacking tumor cells.

“Treatments with unconjugated antibodies against EpCAM have already been tested in clinical trials such as for breast cancer. They were intended to attack the cancer solely with the weapons of the immune system, but they turned out to be clinically ineffective,” said Gerhard Moldenhauer. “However, our amanitin-conjugated antibody has a much greater potential for killing cancer cells.”

Details are of vital importance

Each antibody is linked to between four and eight toxin molecules. Amanitin is regarded as very suitable for this purpose. It is small enough not to be recognized as foreign by immune cells, while it is also robust enough to lend itself to chemical conjugation. “When developing toxin-conjugated antibodies you have to take an awful lot of things into account,” Moldenhauer explains. “The cancer cell has to regularly take the target molecule including the attached antibody into its interior, for this is the only place where the poison can act. In the cell’s interior, the poison needs to detach from the antibody or else it will not be effective. At the same time it is absolutely vital that it does not get lost while it is being carried through the body, because this could cause severe adverse side effects.”

The dosage of the amanitin antibody needs to be determined with the utmost care. One problem is that liver cells are extremely sensitive to the fungal toxin; another is that other healthy cells carry the EpCAM molecule as well and are therefore endangered. However, the results obtained in mice give reason to be optimistic, according to Gerhard Moldenhauer: “Even at high doses we have not detected any organ damage in the animals. We therefore expect that there is a sufficient therapeutic window for a dosage that kills cancer cells while leaving healthy tissue unaffected.”

Moldenhauer, who has many years of experience in developing therapeutic antibodies, already has plans for amanitin-conjugated guided missiles against other cancers. In particular, certain types of leukemia and lymphoma cells also carry highly specific surface molecules which lend themselves as target structures for poison-loaded antibodies.