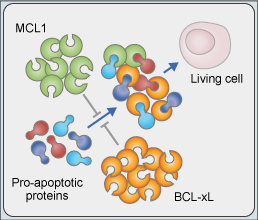 A research team pursuing one of the most commonly altered genes in cancer has laid a critical foundation for understanding this gene that could point the way toward developing drugs against it. A recent study of cancer genetics pointed to the gene MCL1, which encodes a protein that helps keep cells alive. The new research pinpoints compounds that repress MCL1’s activity and highlights an important companion gene that predicts if a tumor is dependent upon MCL1 for survival. Together, these tools suggest a path toward new therapeutics directed at MCL1.

“It was not immediately obvious that MCL1 was such an attractive therapeutic target in cancer,” said Todd Golub, director of the Broad’s Cancer Program and Charles A. Dana Investigator in Human Cancer Genetics at the Dana-Farber Cancer Institute. Golub is also a professor at Harvard Medical School and investigator at Howard Hughes Medical Institute. “But once it became clear that MCL1 was something that we wanted to turn off in tumor cells, we faced two additional problems: we didn’t know which tumors depend on it for survival and there wasn’t an obvious path to drug discovery. This paper addresses those two challenges.”

In a paper appearing in the April issue of the journal Cancer Cell, Golub and colleagues from the Broad Institute and Dana-Farber identify several chemical compounds that tamp down the expression of the MCL1 gene and describe the relationship between MCL1 and a related pro-survival gene, BCL-xL. The research team leveraged several critical Broad Institute resources, including the recently published Cancer Cell Line Encyclopedia (CCLE) and RNAi screening capabilities, to better understand how to target MCL1.

MCL1 is frequently amplified in human cancer, meaning that multiple copies of the gene are often present in tumors. The research team suppressed MCL1 in cancer cell lines, allowing them to determine which ones depended on MCL1 for survival. The researchers then looked for a genetic signature that accurately predicted which cell lines were dependent on MCL1 for survival. The gene BCL-xL, another gene protective against cell death, was clearly the best predictor. In its presence, cancer cells can survive even when MCL1 is turned off.

“That was gratifying not only because BCL-xL was a clear winner as a predictive marker, but also because it encodes a protein in the same pathway as MCL1,” said Guo Wei, the paper’s first author. Wei is a research scientist at the Broad Institute and a research fellow in pediatrics at Dana-Farber. “It’s not just right statistically – it also makes sense given the biology.”

Drugs targeting BCL-xL are currently in clinical trials. The new study predicts that in cancer cells where both genes are highly expressed, combination therapies targeting both genes could be effective in treating the tumor.

The researchers also tested almost 3,000 chemical compounds, searching for ones that turned off the expression of MCL1. One of the compounds that this screen revealed was the natural compound triptolide. To find out how triptolide has its effect, the researchers turned to another Broad-created resource: the Connectivity Map, a database researchers can use to connect drugs, genes, and diseases.

“Based on the Connectivity Map, triptolide appears to be a classical inhibitor of transcription, meaning that it should tamp down the expression of all genes,” said Wei. “However, it disproportionately affects MCL1. If you give a dose of transcriptional inhibitor, most gene transcripts decrease at a gentle rate, but MCL1 levels decline sharply.”

Transcriptional inhibitors like triptolide may be useful tools for probing MCL1 biology, but Golub emphasizes that specific, targeted therapies for MCL1 are also needed. “We used clever chemical genomic approaches to find a way to inhibit MCL1, but the results further our resolve to find more specific MCL1 small molecule inhibitors,” Golub, senior author of the study, said.

“The work suggests a path for the clinical development of an MCL1 inhibitor,” said Wei. “A number of anti-cancer drugs currently in use have the effect of turning off MCL1 expression. Our study suggests that we’re beginning to get a handle on which tumor types might be most responsive to these drugs. And, as newer MCL1-specific drugs are developed, this study suggests the patient population to focus on in clinical trials.”

This work was supported by NIH grant P01 CA068484 and 5U54CA112962, the Novartis Institutes of Biomedical Research, and by a postdoctoral fellowship from the Damon Runyon Cancer Research Foundation. Other researchers who contributed to this work include Adam A. Margolin, Leila Haery, Emily Brown, Lisa Cucolo, Bina Julian, Shyemaa Shehata, Andrew L. Kung, and Rameen Beroukhim.