Home » Cancers » An ABSOLUTEly new view of the cancer genome 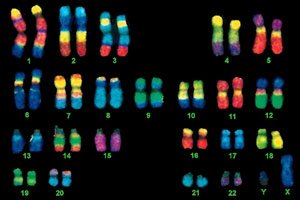 For example, the genome of a cancer cell is drastically disorganized, often with large missing chunks or extra copies of whole chromosomes. Some tumor cells have several-fold the amount of DNA as healthy cells. In addition, tumor samples used in research are never 100% pure – they always contain some fraction of genetically unaltered cells. These are just some of the things that can complicate the search for genetic alterations in cancer.

Researchers at the Broad Institute of MIT and Harvard developed a new computational method, called ABSOLUTE, to help overcome these complications. ABSOLUTE infers each sample’s purity and “ploidy” – the number of genomes in each cancer cell – from relative measures of DNA mass to calculate genetic changes on an absolute (per-cell) basis, giving a more informative picture of the alterations underlying cancer. The work appears in the April 29 online issue of Nature Biotechnology.

“Most biology, including cancer, happens in cells,” said Scott Carter, a computational biologist in the Broad’s Cancer Program and first author of the new work. When tissue samples are prepared for analysis, cell membranes are broken and per-cell data is lost. “To associate what you’re actually measuring with the underlying biology, you need to go back to the unit of cells.”

In large-scale studies to look for DNA alterations in hundreds or thousands of cancer samples, it is impractical to directly and accurately measure the purity and ploidy of each sample. So scientists have thus far used a relative measure of DNA changes that does not directly assess purity and ploidy. The approach can reveal segments of the genome with more or less DNA than other segments, but it cannot discern changes on a per-cell basis, leaving much valuable information hidden.

“You start out measuring these relative changes in DNA mass, but to shed light on cancer, you really want to know the changes specific to the cancer cells,” said Carter.

ABSOLUTE infers purity and ploidy and enables measurements on a per-cell basis. The new method, which is currently being used in several large cancer genome projects, also sheds light on the evolution and population structure of cells within tumors. “ABSOLUTE provides a new window into the genetic changes underlying cancer, on a cellular level,” said Gad Getz, senior author of the new study and director of cancer genome computational analysis at the Broad. “This invaluable tool also gives an unprecedented look at the cellular makeup of tumors in large-scale studies.”

Before applying the new method, scientists extract DNA from a tumor sample containing both normal and malignant cells. Microarrays or DNA sequencing are used to measure the relative amounts of genetic material at each location along the genome, measures that will vary due to local “copy number” changes – extra or missing DNA known as duplications or deletions. The sophisticated statistical analysis of ABSOLUTE is then applied to the relative data, giving a few likely options for per-cell values represented by the data points in the results.

For example, chromosome 10 in a cancer sample might appear in the relative data to be present at 70% the amount in a healthy cell, which could suggest a deletion. But ABSOLUTE creates data models that assign more likely values to that segment – whole numbers such as zero, one, two, or three copies per cell.

ABSOLUTE also exposes alterations that cannot possibly be clonal, or in every tumor cell. As a tumor grows, cancer cells mutate further, sometimes spawning “subclones” with unique genetic alterations that are difficult to discern using existing methods. ABSOLUTE can reveal the presence of these subclonal populations of cells harboring unique mutations. This knowledge can help scientists classify interesting mutations as clonal or subclonal, which can have important research and clinical implications: clonal mutations are important targets for designing therapeutics, and subclonal mutations could foster resistance to targeted treatments.

The team applied its new method to analyze copy number changes in microarray data from 3,155 samples across 25 cancer types, including samples of glioblastoma multiforme and ovarian carcinoma from The Cancer Genome Atlas (TCGA) project. The analysis illustrated that whole-genome doubling, in which the entire genome of a tumor cell is doubled, is common among cancers. In some cancer types, more than half of all samples harbored doubled genomes. The approach also allowed the team to examine the timing of copy number changes relative to genome doublings and showed that genome doubling can have effects on the trajectories of tumor evolution.

With sequenced genomes from 214 samples of ovarian cancer from the TCGA project, the scientists were then able to apply ABSOLUTE and to assign per-cancer-cell values not only to copy number alterations, but also to point mutations, or single-letter misspellings of DNA. This effort identified changes present only in subclones within the tumors.

Patterns in the point-mutation data also allowed the team to classify mutated genes as tumor suppressors or oncogenes. “This analysis gives us a window into the function of mutations,” said Carter. He explained that the method could be useful in helping identify new functional genes among data from other cancer studies.

By providing valuable information on purity and ploidy, ABSOLUTE allows researchers to select the purest samples to use in whole-genome sequencing studies and design the appropriate sequencing strategy to detect mutations in those samples. The method was used in recent studies by Broad researchers of prostate, head and neck, and colorectal cancers.

The team continues to improve the method and apply it to ongoing cancer genome efforts. The researchers are also working to collect samples from cancer patients before and after treatment to detect changes induced by cancer therapies and observe the evolution of subclones.

ABSOLUTE provides a revealing new look inside the genome of cancer cells, one that is already helping unveil the mysteries underlying this disease. For Carter, bringing the data back to the “unit of cells” is crucial to making biological insights. “We hope this new tool will enable more enlightening studies of DNA’s role in cancer.”