Scientists at the German Cancer Research Center (Deutsches Krebsforschungszentrum, DKFZ) have now modified parvoviruses in such a way that they initially lose their ability to infect cells. In a second step, they equipped the viruses with a molecular key for infecting cancer cells. 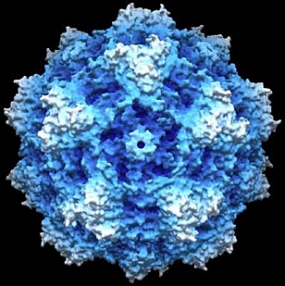 Computer-Simulation of a Parvovirus | © dkfz.de

A number of parvoviruses are able to enter and destroy cancer cells, while they do not cause any disease symptoms in humans. Since 1992, scientists working with Professor Jean Rommelaere at DKFZ have been studying such viruses with the aim of using them for cancer therapy. For their studies, the researchers chose H1 parvoviruses, which normally infect rodents but are also infectious for human cells. H1 viruses kill tumor cells on the basis of their natural properties, i.e., their genetic material does not need to be modified for them to do so. At Heidelberg University Hospital, a phase I/IIa clinical trial is already ongoing to test treatment of malignant brain tumors using H1 viruses.

“The viruses exclusively destroy cancer cells. But with the same efficiency that they infect cancer cells, they also infect healthy cells. There they do not cause any damage and cannot replicate, but we lose a large portion of therapeutic viruses every time,” says Jean Rommelaere. To solve this problem, the researchers engineered a virus. They first modified the genetic material of the virus in such a way that it loses its ability to infect cells. In a second step, this non-infectious virus was equipped with a molecular key for cancer cells.

Using a computer-based model of the H1 viral protein shell, Antonio Marchini and colleagues from Jean Rommelaere’s department were able to make out how the virus makes contact with cells: It attaches to cell surface proteins that are linked to sialic acid. The researchers then exchanged two amino acids of a viral protein which are instrumental for contact with sialic acid. This minute modification dramatically reduced H1’s capacity to infect cells: In cells treated with the genetically engineered virus, the investigators found not even a tenth of the virus load that would have been expected after infection with unchanged H1.

In a second step, Marchini and colleagues equipped the spike-like protein structures of the viral capsid with three additional amino acids. This enables the viruses to bind to a protein called integrin. This is a cell membrane protein which is typically overexpressed in tumor cells. The reengineered viruses recovered their infectious capacity. Normal cells, which carry little or no integrin, were spared. Melanoma cells, however, which typically produce large amounts of integrin, were infected by the reengineered parvovirus with an efficiency comparable to that of the natural H1 virus.

“This is first evidence that it is basically possible to modify properties of H1 according to a plan. We will surely need several more attempts in order to target the viruses more specifically to cancer cells in the second step. We also already have ideas how to further enhance the infectious capacity and the potential to destroy cancer cells,” says Antonio Marchini.