Cancer chemotherapy can be a life-saver, but it is fraught with severe side effects, among them an increased risk of infection. Until now, the major criterion for assessing this risk has been the blood cell count: if the number of white blood cells falls below a critical threshold, the risk of infection is thought to be high. A new model built by Weizmann Institute mathematicians in collaboration with physicians from the Meir Medical Center in Kfar Saba and from the Hoffmann-La Roche research center in Basel, Switzerland, suggests that for proper risk assessment, it is essential to evaluate not only the quantity of these blood cells, but also their quality, which varies from one person to another.
This research may represent an important step in the emerging field of personalized medicine, leading to a more individualized approach to chemotherapy. In particular, better precautions might need to be taken to prevent infection in high-risk patients whereas those at a low risk could be spared unnecessary preventive treatments.

The study, recently published in the Journal of Clinical Investigation, brought together the expertise of researchers from such diverse disciplines as applied mathematics, electrical engineering, oncology, immunology and pediatrics.
The new model reveals how the immune system functions under conditions of neutropenia – dangerously low levels of white blood cells, mainly neutrophils. In this condition, which often emerges after chemotherapy or bone marrow transplant, severe infections can develop if the immune system fails to perform the crucial function of devouring and destroying bacteria. “Our mathematical model has revealed previously unknown mechanisms responsible for the variability in the vulnerability of neutropenia patients to infections,” says research leader Prof. Vered Rom-Kedar of the Weizmann Institute’s Computer Science and Applied Mathematics Department.
The model suggests that in neutropenia, the tug of war between the blood cells and the bacteria cannot be explained away by the simple bacteria-to-cell ratio, nor by the threshold that the blood cell count must exceed. Rather, when neutrophil counts are low, the patient’s immune system enters a fragile equilibrium – described as “bistability” in mathematical terms – which can easily be disrupted, with dramatic consequences, by even minute changes in bacterial concentration or neutrophil numbers. Other factors that can radically affect this equilibrium include the effectiveness of the neutrophil functioning and the permeability of tissues to bacteria, which can increase due to cancer therapy.

Thus according to the model, in healthy people, the fact that the effectiveness of neutrophils varies from one person to another usually has no significant consequences. In contrast, in patients with neutropenia, this individual variability can make a difference between life and death. This conclusion is drawn from the study based upon the blood analysis of four healthy volunteers. To use the model in the clinic, such analysis should be applied to large populations.
The model has already offered a plausible explanation for a number of medical mysteries. It helps explain, for example, why after chemotherapy, some cancer patients contract life-threatening infections even when in isolation under sterile conditions: If the neutrophils of these patients are “weak,” even the smallest numbers of bacteria, for example, those present in the gut, can tilt the fragile immune balance in favor of the bacteria. 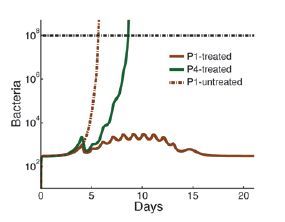 The study also explains why certain patients, following chemotherapy or a bone marrow transplant, may develop acute infections even if their neutrophil levels have returned to relatively normal levels. The chemotherapy lowers both neutrophil levels and function, making the tissues of these patients more penetrable to bacteria. The model suggests that as a result, in some patients the bacterial concentrations might increase so quickly that by the time the neutrophil counts rise back to “normal,” the rapidly multiplying bacteria have already gained a head start, so that the neutrophil recovery is insufficient for overcoming the infection. This scenario may eventually also shed light on the rare cases in which acute bacterial infections develop in individuals with normal immunological function. The model suggests that in such cases, a high growth rate of unusually virulent bacteria could overcome the appropriate quantitative and qualitative neutrophil response.
Certain puzzling medical cases could be clarified thanks to the model. For example,  a newborn baby treated at Meir Medical Center recovered from neutropenia even though his absolute neutrophil count (ANC) had fallen as low as 200 neutrophils per microliter of blood, whereas an adult whose ANC stood at 380 after chemotherapy died of infection. The model has suggested how such clinical parameters as the poor quality of the neutrophils might have lead to the death of the adult. In addition, the model could help doctors to understand the mechanism behind the development of severe recurrent infections in some patients. Of one thousand patients referred to Meir Medical Center because of such infections, diagnosis could be established in only one-third of the cases. Weizmann Institute’s mathematical modeling suggests that at least some of the unresolved cases may have resulted from a combination of several mild defects, including variation in the function of neutrophils and other immune cells.
The study was performed by researchers with an unusual combination of backgrounds. Lead author, Weizmann Institute’s mathematician Prof. Vered Rom-Kedar, specializes in the investigation of dynamic systems. The first author, Dr. Roy Malka, an electrical engineer who has become an applied mathematician, conducted this research as part of his Ph.D. studies at Weizmann; he is now conducting postdoctoral research on related subjects at Harvard Medical School. The idea for the project was first proposed by Dr. Eliezer Shochat, a senior oncologist who also has a Ph.D. in applied mathematics from Weizmann and now works in a research group at Hoffman-La Roche in Basel, Switzerland. The study was performed in collaboration with the Meir Medical Center team: Prof. Baruch Wolach, M.D., Head of the Laboratory for Leukocyte Function and Chair of Pediatric Immunology at Tel Aviv University’s Sackler Faculty of Medicine; and laboratory manager Ronit Gavrieli, M.Sc., who performed the experiments.
Says Wolach: “Our study suggests that to achieve optimal results in applying chemotherapy, and/or in patients with innate neutrophil dysfunction, it is of value to assess the patient’s neutrophils periodically, as well as the bacterial concentration. Such assessments will help reduce the morbidity and the mortality, as well as the cost, associated with unnecessary hospitalizations and the administration of expensive medications. Moreover, by cutting down on the use of antibiotics, these assessments can help in preventing the rise in antibiotic resistance.”

Prof. Vered Rom-Kedar heads the Moross Research School of Mathematics and Computer Science; and her research is supported by the Yeda-Sela Center for Basic Research. Prof. Rom-Kedar is the incumbent of the Estrin Family Chair of Computer Science and Applied Mathematics.