Home » Cancers » Biomarkers for virus-induced cancer in the oropharynx

It may be possible to treat the two disease types differently. 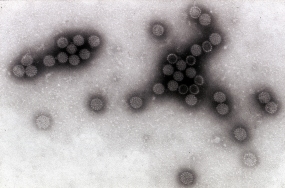 About one quarter of cancers of the oropharynx is caused by an infection with human papillomaviruses (HPV). It is primarily HPV type 16 that is involved, the same one which is also responsible for about 60 percent of all cervical cancer cases. Patients with oropharyngeal tumors caused by HPV have a better survival prognosis than patients in whose tumors the virus is not found. This type of disease is considered to be mostly caused by alcohol and tobacco use.

“Differentiation is important because it may be relevant for therapy,” says Dr. Michael Pawlita of DKFZ. “For example, HPV-induced cancers are considerably more sensitive to radiation.” A biomarker that indicates which tumor is effectively caused by HPV and, respectively, reliably predicts an individual patient’s prognosis could improve therapy planning. “But simply detecting the viral DNA does not lead us anywhere, because these common viruses may simply be found in the tumor environment without having caused the cancer,” says Pawlita.

The scientists from DKFZ and the Ear, Nose and Throat Hospital of Heidelberg University have now analyzed 199 biopsies of oropharyngeal tumors with detectable human papillomavirus DNA in about half of the samples. The researchers tested five different direct and indirect biomarkers. Using statistical methods, they analyzed which of the markers produces the most valuable results and most reliably predicts those patients with the best chances of survival.

The study revealed that both the detection of a particularly high viral load and a specific viral gene activity pattern that is typical of cervical cancer have the highest association with favorable disease progression.

“The viral gene activity pattern typical of cervical cancer had not yet been studied for an association with prognosis. However, we considered it likely that the viruses in tumors of the oropharynx show the same pattern of gene activity as in tumor cells of the cervix,” says Dr. Dana Holzinger, first author of the publication.

The researchers are now planning to verify their results in more tumor biopsy samples and to develop a test that can be applied in clinical routine. “It would be useful to investigate whether the two disease types may be treated by different therapies. For such studies, it is vital to have a reliable biomarker,” says Michael Pawlita.

A picture for this press release is available at:
www.dkfz.de/de/presse/pressemitteilungen/2012/images/HPV.jpg