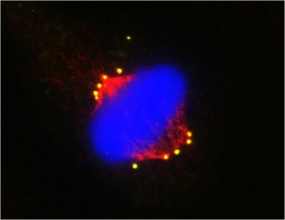 When normal cells divide, the chromosomes, i.e. the genetic material, are distributed evenly to exactly two daughter cells. This process is regulated by two polar bodies, or centrosomes. When cell division begins, they are located at the opposite poles of the cell and they start forming protein fibers to each chromosome. These are then each pulled under tension to one of the poles and, thus, distributed evenly to the two newly forming daughter cells. Cancer cells often have too many centrosomes. This should normally make it impossible for them to divide correctly and, as a result, lead to their death, but most of them have developed a trick to escape this fate: They form clusters of polar bodies at two poles.

“We already discovered this clustering as a potential target for cancer treatment a couple of years ago,” says Professor Alwin Krämer, head of DKFZ’s Clinical Cooperation Unit Molecular Hematology/Oncology. Conducting further research, the scientists found out that the antibiotic griseofulvin prevents clustering.

Professor Alwin Krämer and Dr. Marc S. Raab, head of the Max Eder Junior Research Group “Experimental Therapies for Hematologic Malignancies”, collaborating with an international research team, have now been able to optimize this substance for use in cancer treatment. Project partners included scientists of Heidelberg University Hospitals. “The optimized agent GF-15 reduces the tension of the protein fibers and thus prevents clustering. As a result, cell division proceeds in a chaotic manner and this eventually leads to the death of the cancer cell,” Raab explains. His junior research group is supported by the German Cancer Aid (Deutsche Krebshilfe).

The investigators first tested the novel inhibitor in the culture dish. The substance was effective in various cell lines derived from such different types of cancer as colon cancer, cervical cancer, brain tumors, and blood cancer. In normal cells, however, GF-15 did not show any effect. The group then tested the substance in mice with colon cancer or cancer of the bone marrow. The treated animals survived significantly longer than the untreated ones and they showed no serious side effects. “GF-15 has more favorable pharmacological properties than the original griseofulvin. It is more specific and more effective,” Krämer explains. Further tests will show whether GF-15 can really be further developed into an effective anti-cancer drug.