Tumourigenesis is driven by genetic alterations and by changes in the epigenome, for instance by the addition of methyl groups to cytosine bases in the DNA. A deeper understanding of the interaction between the genetic and epigenetic mechanisms is critical for the selection of tumour biomarkers and for the future development of therapies. Human tumour specimens and cell lines however contain a plethora of genetic and epigenetic changes, which complicate data analysis. In contrast, certain mouse tumour models contain only a single genetic mutation and allow the analysis of nascent tumours. Scientists of the Max Planck Institute for Molecular Genetics in Berlin have now discovered a recurring pattern of more than 13,000 epigenetic alterations in young tumours of the mouse. This genome-wide pattern was found to be partly conserved in human colon carcinoma, and may therefor facilitate the identification of novel clinical colon cancer biomarkers for early detection. 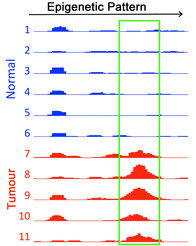 Two kinds of molecular changes are known to trigger tumour development: one is genetic mutations – i.e. alterations in the alphabetic sequence of the DNA –activating genes that lead to uncontrolled growth of tumours, or inactivating genes that inhibit this growth. The other is epigenetic modifications, for example new distributions of methyl groups in the DNA that contribute to the genetic information in the cancer cells being interpreted differently.

Genetic and epigenetic mechanisms work together in cancer development – but little was known about how these systems mutually influence one another, and which changes first come to light. These questions can only be answered with great difficulty through investigating human tumours: the cancer is usually already several years old when diagnosed. Accordingly, the cancer cells already exhibit thousands of genetic and epigenetic changes at this stage, which complicates the analysis.

The matter is different for the corresponding polyps in mice, which the researchers can investigate considerably earlier following their formation. For this reason, scientists of the Max Planck Institute for Molecular Genetics have now pursued the question of which epigenetic changes in intestinal tumours occur first with the help of a mouse model.
“With mice, we can investigate the first changes much more easily than with humans”, says Markus Morkel, who led the study. The scientists analysed the epigenetic changes in a strain of mice with a defective copy of the APC gene. This gene serves as an intestinal tumour suppressor in mice as well as in humans. Accordingly, it has lost its functionality in a majority of patients with colon cancer.

The results displayed a clear picture: The researchers recognised a recurring pattern of more than 13,000 epigenetic changes in all of the mouse tumour samples. By contrast, they did not find this pattern in healthy intestine or in intestinal stem cells, which are the cells of origin of the tumour. Since the mice –and hence the tumours– were less than three months old, the changes must have already spread shortly after the first genetic mutation in the APC gene within the tumour cells. According to the scientists, the first mutation already leads to pathological activation of numerous enzymes controlling the epigenetic mechanisms.

Remarkably, the molecular biologists discovered large parts of the tumour-specific epigenetic pattern not only in the mouse, but also in human colon cancer tissue. “These initial epigenetic changes could therefore serve as markers and significantly simplify the early diagnosis of colon tumours in the future”, hopes Markus Morkel. Patients would merely have to provide a blood sample for the diagnosis and could forego an enteroscopic procedure.