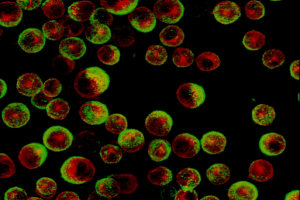 Professor Daniel Davis and his team used high quality video imaging to investigate why the drug rituximab is so effective at killing cancerous B cells. It is widely used in the treatment of B cell malignancies, such as lymphoma and leukaemia – as well as in autoimmune diseases like rheumatoid arthritis.

Using high-powered laser-based microscopes, researchers made videos of the process by which rituximab binds to a diseased cell and then attracts white blood cells known as natural killer (NK) cells to attack. They discovered that rituximab tended to stick to one side of the cancer cell, forming a cap and drawing a number of proteins over to that side. It effectively created a front and back to the cell – with a cluster of protein molecules massed on one side.

But what surprised the scientists most was how this changed the effectiveness of natural killer cells in destroying these diseased cells. When the NK cell latched onto the rituximab cap on the B cell, it had an 80% success rate at killing the cell. In contrast, when the B cell lacked this cluster of proteins on one side, it was killed only 40% of the time.

Professor Davis says: “These results were really unexpected. It was only possible for us to unravel the mystery of why this drug was so effective, through the use of video microscopy. By watching what happened within the cells we could clearly identify just why rituximab is such an effective drug – because it tended to reorganise the cancerous cell and make it especially prone to being killed.”

He continues: “What our findings demonstrate is that this ability to polarise a cell by moving proteins within it should be taken into consideration when new antibodies are being tested as potential treatments for cancer cells. It appears that they can be up to twice as effective if they bind to a cell and reorganise it.”

The findings from this study have been published online today on the website of the journal Blood. The research was carried out in collaboration with MedImmune, the global biologics research and development arm of AstraZeneca.

Commenting on the research Dr Matt Sleeman, Senior Director of Biology at MedImmune said: “Not only is this a great observation that can influence how we as a biotech company identify and design future therapies, it also shows the innovative ‘out of the box’ thinking that can be achieved by working in close partnership with academics at the top of their field. This unique partnership, bringing together industry and academia, demonstrates a real catalyst of scientific change within the UK, and I am excited by the potential of the MCCIR to bring further innovation that could ultimately bring benefit to patients.”

Much of the research for this study was carried out during Professor Davis’ time at Imperial College London. He will be continuing to use high quality video imaging at a microscopic level to investigate immunology at the MCCIR.

Professor Davis and MedImmune would like to acknowledge the funding they received from the Medical Research Council which helped make this study possible. The aim of the grant was to bring industry and academia closer together.

Images and video of the B cells being killed can be obtained from the press office. The videos can be viewed on the UoM Press Office Youtube channel here and here. Please credit the MCCIR.

More videos can viewed on the journal’s webpage here.

Professor Davis is available for interviews.

The paper “Rituximab causes a polarisation of B cells which augments its therapeutic function in NK cell-mediated antibody-dependent cellular cytotoxicity” has been published online on the website of the journal Blood.