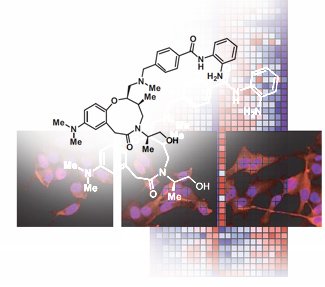 A new screening approach has led researchers to a selective HDAC1/
HDAC2 inhibitor (shown here) as a way to induce differentiation in
neuroblastoma. Their research points to a potential alternative
strategy for treating this pediatric cancer.
Image by Lauren Solomon, Broad Communications

For many years, Stegmaier and her colleagues have been pursuing a new approach: instead of looking for drugs that will directly kill cancer cells, they are on the hunt for drugs that will, in simple terms, make cancer cells grow up. This approach, known as differentiation therapy, is based on the concept that cancer cells are stuck in – or have regressed to – an immature state. In this state, they multiply unchecked. By using chemical compounds to coax cancer cells to mature, or differentiate, researchers have successfully treated certain forms of cancer, such as acute promyelocytic leukemia. Several lines of evidence suggest that differentiation therapy could also be used to treat patients with high-risk neuroblastoma. But finding compounds that have this maturing effect has not been easy.

In a paper published in Chemistry & Biology, Stegmaier and her colleagues at the Broad Institute, the Dana-Farber Cancer Institute, and Boston Children’s Hospital report important progress in developing a strategy to pinpoint promising compounds. Using a new method, the team uncovered a probe compound that causes neuroblastoma cells to differentiate. Although not a drug, the compound points to a new way of targeting neuroblastoma cells.

“We know that in many ways, these cells are poised to differentiate if we could only figure out the trigger,” said Stegmaier, a Broad associate member and a member of the Dana-Farber/Boston Children’s Cancer and Blood Disorders Center. “The hope is that differentiation therapy offers an alternative mechanism [for attacking neuroblastoma], and that the toxicity won’t be as great as with standard cytotoxins.”

Stegmaier, whose connection to the Broad dates back to her time as a postdoctoral fellow in the laboratory of Broad core member Todd Golub, teamed up with the Broad’s Therapeutics Platform to search for compounds of interest. While a postdoc, Stegmaier had developed a gene expression profile, or signature, of differentiated neuroblastoma cells. This unique signature of active genes would give the researchers a signal they could look for to identify the most promising compounds.

Rather than screening all of the chemical compounds in the Therapeutics Platform’s extensive collection, the team decided to use a subset of molecules with a particular focus. These compounds – built at the Broad through a process known as diversity-oriented synthesis (DOS) – were specifically developed to focus on genome-organizing complexes known as chromatin.

“There were a couple of things that were intriguing right off of the bat with that data,” said Jeremy Duvall, manager of DOS chemistry in the Therapeutics Platform. The results of the screen pointed to a DOS compound known simply as BRD8430, could induce neuroblastoma cells to mature, while closely related structures could not. “There seemed to be a preferred stereochemical relationship that affected its activity. That was exciting: that’s what we look for when we look at these datasets.”

BRD8430 is part of a class of compounds known as HDAC inhibitors. These compounds target histone deacetylases (HDACs), which are a type of gene-regulating protein with lots of effects. HDAC inhibitors have been connected to a variety of diseases, including sickle cell anemia, psychiatric diseases, metabolic diseases, and other forms of cancer. There are a number of different kinds of HDACs, and some inhibitors hit more than one of these targets. Broad associate member Jay Bradner, who has studied HDAC inhibitors in the context of sickle cell anemia, helped Stegmaier determine that BRD8430 selectively targets HDACs 1 and 2.

Duvall recalls the meeting where Stegmaier showed the team data suggesting that BRD8430 targeted HDACs 1 and 2. “When we saw the data, we realized that a door had opened,” he said. “We told her, you need to talk to the HDAC experts at the Broad: there’s a wealth of knowledge we could tap into right here.”

Ed Holson, director of medicinal chemistry for the Broad’s Stanley Center for Psychiatric Research, has been assembling a toolkit of selective HDAC inhibitors for the last four years, looking for cognitive enhancers that could be used to treat Alzheimer’s disease or post-traumatic stress disorder. When Holson heard about the neuroblastoma results, he immediately offered up the toolkit of compounds. These probe compounds helped the team confirm its results and validate its findings.

“We’re happy to share these compounds,” said Holson who has shared the toolkit with several other research groups. “The whole idea is to leverage the domain expertise that we have in the Stanley Center across [the Broad’s] platforms, programs, and wherever they might be applicable. HDACs have been implicated in a lot of different diseases, and the point of the toolkit is to get to a finer resolution about which HDACs are important in certain indications.”

Stegmaier and her colleagues also did a series of genetic experiments to turn off, or knock down, HDACs 1 and 2. These experiments also confirmed that these enzymes could play a key role in neuroblastoma differentiation. They then treated cells with both BRD8430 and cis-retinoic acid, a treatment already being given to patients with neuroblastoma, and found that the compound enhanced activity of the existing treatment, suggesting a possible role for combination therapy. But a long path to the clinic may lie ahead.

“While there are tool compounds that selectively target HDAC 1 and 2, there is not yet a commercially available compound with good drug-like properties,” said Stegmaier. “From a clinical perspective, that’s an important next step.”

But Stegmaier adds that if it is possible to develop a drug that selectively inhibits HDACs 1 and 2, but not the other HDACs, it could minimize toxicity. “We don’t know yet for certain, but there’s hope,” she said. “Companies have shown interest in pursuing selective inhibitors in the past – maybe these findings will reinvigorate that work.”