In therapy-resistant cases of neuroblastoma, scientists from the German Cancer Research Center (DKFZ) and Heidelberg University Hospital have now discovered an enzyme which promotes autophagy and thus protects cancer cells from treatment through chemotherapy. Blocking this enzyme might make cancer cells more sensitive to treatment. 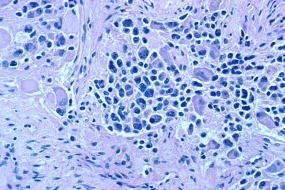 Scientists from the department headed by Professor Dr. Olaf Witt at the German Cancer Research Center (Deutsches Krebsforschungszentrum, DKFZ) and at Heidelberg University Hospital are searching for more effective methods to treat neuroblastomas. The researchers are particularly focusing on the role of 18 different HDAC enzymes which appear to promote the aggressiveness of neuroblastomas in various ways. Dr. Ina Oehme and her colleagues from Witt’s department have now studied whether a member of the HDAC family might be linked to the sensitivity of tumors to chemotherapy in high-risk neuroblastomas. She discovered that the high-risk tumors that responded well to therapy were those which had produced only small quantities of HDAC10 prior to treatment.

The Heidelberg researchers subsequently used an experimental agent or a method of blocking the gene to turn off HDAC10 experimentally in cell cultures developed from highly aggressive neuroblastomas. They subsequently treated the cells with the chemotherapy agent doxorubicin. In neuroblastoma cells, this treatment normally induces a self-digestion process known as autophagy, a kind of recycling of endogenous cellular components. This is a biologically ancient program for survival that protects cells during starvation. Highly aggressive cancer cells use autophagy to overcome stress caused by cytotoxic agents.

However, in neuroblastoma cells without a functioning form of HDAC10, treatment disrupted the multi-stage process of autophagy of cellular components at a specific point. As expected, these cells were once again rendered sensitive to the anticancer drug. The researchers cross-checked their results by boosting the activity of the HDAC10 gene in neuroblastoma cells. This protected the cells from the consequences of subsequent chemotherapy.

“HDAC10 appears to play a key role in autophagy and resistance to chemotherapy in high-risk neuroblastomas,” Olaf Witt summarizes. “In advanced tumors, high levels of HDAC10 may serve as a biomarker for resistance. A drug that specifically turns off HDAC10 might give us a more effective method of treating neuroblastomas that respond very poorly to chemotherapy.”