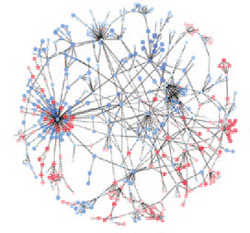 Cancer encompasses a complex group of diseases traditionally defined by where in the body it originates, as in lung cancer or colon cancer. This framework for studying and treating cancer has made sense for generations, but molecular analysis now shows that cancers of different organs have many shared features, while cancers from the same organ or tissue are often quite distinct. 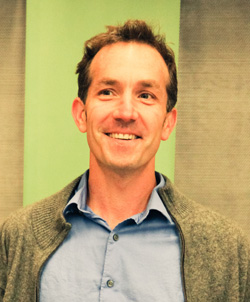 The Pan-Cancer Initiative, a major effort to analyze the molecular aberrations in cancer cells across a range of tumor types, has yielded an abundance of new findings reported in 18 forthcoming papers, including four published in the October issue of Nature Genetics. The initiative, launched in October 2012 at a meeting in Santa Cruz, California, is part of the Cancer Genome Atlas (TCGA) project led by the National Cancer Institute and the National Human Genome Research Institute.

Josh Stuart, professor of biomolecular engineering at the University of California, Santa Cruz, helped organize the Pan-Cancer Initiative and is lead author of a commentary in Nature Genetics giving an overview of the project and its initial findings.

“For years we’ve been looking at one tumor type at a time, but there are patterns you can only spot by making connections across different tissues and tumor types. Finding these similarities across tissues can have important implications for treatment,” Stuart said.

For example, some types of bladder cancer look very similar to certain lung and head-and-neck cancers, and recognizing those similarities may open up new therapeutic options. “This could allow oncologists to apply all they know about treating head-and-neck squamous cell tumors to the ten percent of bladder cancers that have the same characteristics,” Stuart said.

TCGA is generating comprehensive maps of the key genomic changes in major types and subtypes of cancer, eventually covering at least 20 different cancer types. TCGA researchers are profiling thousands of tumors to discover molecular aberrations at the DNA, RNA, protein, and epigenetic levels. The Pan-Cancer Initiative has done comparative analyses of the first 12 tumor types profiled by TCGA.

The analyses show that the tissue of origin is an important factor, producing a dominant signal that groups tumors mostly according to their tissue of origin. But the data also reveal a number of interesting signals that cut across tumor types and suggest new ways of categorizing tumors, Stuart said. In addition, the statistical power gained by combining all of the data available from different tumor types has enabled researchers to see new patterns of genomic aberrations.

“In ovarian cancer, for example, we were able to identify mutations that correlate with the response to treatment, but only by using data from other types of cancer,” Stuart said.

A persistent problem in cancer genomics has been distinguishing “driver” mutations from “passenger” mutations. Cancer cells often accumulate large numbers of genetic mutations that do not play a role in driving the uncontrolled cell growth that is a hallmark of cancer. These passenger mutations greatly complicate efforts to identify the genomic drivers of cancer. Aggregating data from the 12 tumor types gave Pan-Cancer researchers enough statistical power to see patterns that weren’t apparent before. One of the forthcoming papers identifies with high confidence many new genomic drivers of cancer, Stuart said.

The Pan-Cancer analyses have also revealed the importance of new classes of mutations, such as those that affect how a cell’s DNA is packaged in the chromosomes. As cells differentiate into specialized cell types during an organism’s development, some genes are turned off and others are turned on depending on how the DNA is packaged together with specialized proteins to make “chromatin.” Genomic changes (gene amplification, deletion or mutation) affecting genes that control the packaging of DNA can disrupt this key regulatory mechanism. One of the Nature Genetics papers (Zack et al.) analyzed amplifications and deletions and found 104 novel regions that had not been associated with cancer previously, and these regions contain a rich supply of genes involved in “epigenetic” modifications of chromatin.

“There are so many different ways to mess up the packaging of DNA that the mutations look random in any one tumor type, but now we have enough data to see that chromatin remodeling is a big factor in a lot of these tumors,” Stuart said.

Stuart played a central role in creating the organizational framework that made the Pan-Cancer analyses possible. The project started as an informal collaboration among members of the TCGA research network, but then quickly expanded to include many other interested researchers. Coordinating all these efforts was a major task. Stuart worked with the bioinformatics company Sage Bionetworks to create a data repository called Synapse for the project. To ensure that everyone was working from the same data set, a data “freeze” was established in December 2012. But Stuart realized that many important analyses would depend on the results of other analyses carried out by different research groups.

“The interdependencies are so complicated that everybody had to abide by a schedule in order to play the game,” Stuart said. “The system worked really well, and the project has ballooned because there are so many interesting things to look at. We have 18 papers coming out in this first release, and there are 60 more Pan-Cancer papers coming that I’m currently tracking.”

The Synapse system created by Sage Bionetworks is described in one of the Nature Genetics papers (Omberg et al.). “This beautifully organized data repository is now available for scientists around the world to use to go beyond these initial analyses and discover even more about cancer,” Stuart said.

Researchers will continue to use the framework and procedures Stuart established as they integrate new tumor types and new data from TCGA, as well as data from other cancer genomics projects. Stuart has just been named, along with Gad Getz of the Broad Institute of MIT and Harvard, to lead an international pan-cancer initiative that will combine TCGA data with data from other cancer genomics efforts around the world.

The hope is that these cross-tumor investigations will lead to new and improved cancer treatments. One goal is to identify biomarkers that can be used across a range of tumor types to indicate which therapies are likely to be most effective. The results of these studies may also point toward targets for novel therapeutic agents that can be tested clinically.

“These initial papers are just the first step, and we expect much more to come from the Pan-Cancer Initiative,” Stuart said. “With the infrastructure now in place, we can scale up to look at more types of data, especially whole genome sequencing data, and to include many more tumor types, including rare tumors.”