Home » Cancers » Leukemia Cells are Addicted to a Healthy Gene

Leukemia Cells are Addicted to a Healthy Gene

What keeps leukemia cells alive almost forever, able to continue dividing endlessly and aggressively? New research at the Weizmann Institute suggests that, in around a quarter of all leukemias, the cancer cells rely on an internal “balance of terror” to keep going. When one version of a certain gene is mutated, it becomes a cancer-promoting gene – an oncogene. But the new findings show that the second, normal version of the gene, which functions alongside the mutation, is what keeps the cells both cancerous and alive, able to continue forging their destructive pathway in the body. This research appeared last week in Cell Reports.
That gene, RUNX1, is crucial for the development and maintenance of the blood circulatory system. It encodes a transcription factor – a protein that regulates the expression of many other genes. In the blood system, this transcription factor directs the differentiation of certain adult stem cells found in the bone marrow into the various mature blood cells. It only takes a single mutation in the RUNX1 gene in this type of stem cell to send it down the path to becoming a leukemic stem cell. Acute myeloid leukemia (AML), for example, is characterized by a very specific kind of mutation called a translocation. A bit of genetic material from chromosome 8 makes its way over to the RUNX1 gene on chromosome 21 and inserts itself into the genetic sequence. The result is an oncogene that encodes a fused protein – one that takes on some new functions and loses some old ones. Several other forms of leukemia, including the most prevalent childhood leukemia, ALL, begin with a similar translocation involving RUNX1 and chromosome 12.
“The fused oncoprotein, because it directly regulates genes, leads to a series of further genetic changes in the cell,” says Prof. Yoram Groner of the Institute’s Molecular Genetics Department, who led the research. Groner has conducted a number of important studies of RUNX1 and other chromosome 21 genes in the past; these have included deciphering the role of RUNX1 in Down syndrome leukemia. 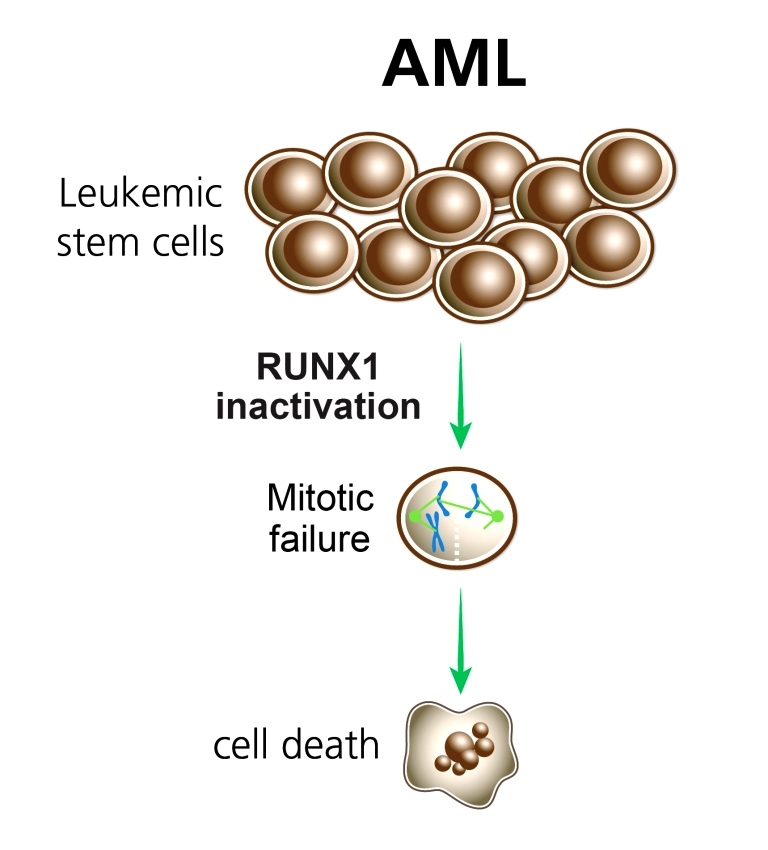 Pre-leukemic stem cells (top) with both mutated and healthy copies of the RUNX1 gene already display some of the characteristics of acute myeloid leukemia (AML). When the non-mutated copy of the gene is inactivated, disruptions in the spindle-assembly-checkpoint phase of cell division trigger cell death

The present study was mainly conducted by postdoctoral fellow Dr. Oren Ben-Ami in Groner’s lab, together with the group of Dr. Amos Tanay of the Computer Science and Applied Mathematics Department and Dena Leshkowitz of the Israel National Center for Personalized Medicine. In preparation for their research, the scientists were searching in various bimolecular databases for information. That is when they noticed something unusual: The clinical data suggested that the second copy of the RUNX1 gene – the healthy, non-mutated gene – in the leukemic cells was always preserved and even highly functional. Of course, almost all the genes in our cells are doubles – one copy from each parent – and the mutations that lead to cancer are likely to occur in only one of those genes. But somewhere along the path leading to full blown cancer, the healthy genes commonly tend to get silenced or overruled and the mutated ones end up prevailing.

This suggested to Groner’s team a fairly unorthodox notion: The healthy version of the RUNX1 gene may also play a role in the development of the disease. But how and at what stage?
To pursue this question, the researchers grew leukemic cells in a lab dish and silenced either the healthy RUNX1 genes or the mutated ones. Sure enough, when the normal gene was silenced, the cells died; while those with both the mutated and healthy genes acted like highly potent cancer cells, refusing to expire. Further investigation revealed that the cancer cells were managing to avoid a type of cell death known as apoptosis – a suicide mechanism which generally keeps cells that potentially harbor cancerous mutations from multiplying. In other words, it appeared that the healthy, rather than the mutated gene, was responsible for one of the more treacherous features of cancer cells – their stubborn persistence.
Groner says the study demonstrates that the leukemic cells are “addicted” to the normal RUNX1; that is, they are physiologically dependent on the activity of normal RUNX1. “As the mutation process continues over time, the translocation-containing oncogene becomes a ‘virtuoso’ at transforming the cell into a cancer cell. When things go too far in the direction of all-out destruction, the cell needs that ‘balance of terror’ to stave off death.”
Groner expects that these findings will open the door to new pathways in the search for better diagnostics and treatments for these forms of leukemia. In addition, the findings suggest that the activity of healthy genes alongside their mutated counterparts may play a role in a number of other cancer processes. “It is something no one really looked for before,” says Groner.
Prof. Yoram Groner’s research is supported by the Kekst Family Institute for Medical Genetics, which he heads; the M.D. Moross Institute for Cancer Research, which he heads; the David and Fela Shapell Family Center for Genetic Disorders Research, which he heads; and the Leona M. and Harry B. Helmsley Charitable Trust. Prof. Groner is the incumbent of the Dr. Barnet Berris Professorial Chair of Cancer Research.

Dr. Amos Tanay’s research is supported by Pascal and Ilana Mantoux, Israel/France; the Wolfson Family Charitable Trust; the Rachel and Shaul Peles Fund for Hormone Research; and the estate of Evelyn Wellner. Dr. Tanay is the incumbent of the Robert Edward and Roselyn Rich Manson Career Development Chair in Perpetuity.