Home » Cancers » A Constellation in the Chaos of Cancer Chromosomes

A Constellation in the Chaos of Cancer Chromosomes 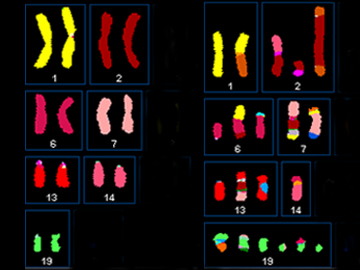 Stephen Elledge and his colleagues believe they can now explain why cancer cells contain many more chromosome abnormalities (right) than healthy cells (left). Image: Joanne Davidson, Mira Grigorova and Paul Edwards/University of CambridgeThe most striking visual hallmark of cancer cells is their abnormal number of chromosomes and chromosome arms. This feature, known as aneuploidy, was first seen in 1914 by Theodor Boveri who observed that tumor cells consistently display an abnormal number of chromosomes—either missing entirely, missing parts, or copied over as extras—compared to normal diploid cells.

Elledge’s study, published October 31, 2013 in the journal Cell, looked at sequencing data from 8,200 tumors of all types, comprising a total of 1.2 million mutations. The scientists developed the computational method, called Tumor Suppressor and Oncogene (TUSON) Explorer, to analyze the patterns of mutational signatures in tumors and predict the likelihood that any individual gene functions as a tumor suppressor gene (TSG) or oncogene (OG). They used TUSON Explorer to comb through the tumor sequencing data to predict known and novel cancer drivers. More generally, the team was looking for what Elledge calls “STOP and GO” genes. “STOP genes are genes that inhibit proliferation and tumorigenesis, TSGs for example, by blocking abnormal cell division,” said Elledge. “GO genes are either oncogenes or genes essential for normal or cancerous cell proliferation.”

In this study, Elledge’s team was able to mathematically characterize the STOP, GO, and essential genes they found. They placed these genes onto their normal chromosome locations and then looked at the balance of STOP and GO genes on each chromosome, giving each chromosome and chromosome arm a score. They found that chromosomes or chromosome arms that in balance had a preponderance of STOP genes were much more likely to be deleted in tumors. They found the opposite for GO genes.  Chromosomes with the highest density of GO genes relative to STOP genes were the most likely to be amplified in tumors.

“The fact that analysis of genes inhibiting or promoting tumorigenesis on chromosomes could predict aneuploidy so well means that specific aneuploid events are selected for and therefore drive tumorigenesis,” Elledge said. What emerged from their studies is a much more nuanced but intriguing view of the twisted geography of the genomic landscape of a tumor.

Traditionally, the few mutated TSGs and OGs in each tumor have been thought to represent the main cancer drivers. “We now propose that along with these mutational drivers, copy number changes (which are much more frequent) represent an important co-pilot of cancer cells,” said Elledge.

In the classical “two hit” hypothesis for tumor suppressors, a first mutational hit in a TSG does not result in a cancerous effect, while losing both copies would promote tumor formation. Elledge and his colleagues now propose that for many tumor suppressor genes mutated in sporadic cancer even the first hit has an effect in promoting cancer. “This is due to the fact that only one copy of many tumor suppressor genes is not enough to restrain tumorigenesis, a feature called ‘haploinsufficiency,’” he noted.

Importantly, this concept also applies to large deletions, where loss of one copy of whole groups of genes represents the first hit. The remaining copies of these genes would be unable to crank out sufficient protein to fully execute its TSG or STOP function, due to haploinsufficiency and would act in a cumulative fashion to drive tumorigenesis. The opposite effect of haploinsufficiency is triplosensitivity where extra copies of GO genes are produced by amplifications. The over-repeated GO gene overexpresses its gene product, an ideal outcome for tumor progression.

Haploinsufficency and triplosensitivity are the prime movers of a cumulative process that shapes the cancer genome, Elledge now believes. “The aneuploidy is actually driving the cancer,” he says. “It’s the summation of all these growth controlling and survival genes that when they are not mutant are having their effect. A big part of what’s promoting cancer has to do with a constellation of these chromosome level events, not just point mutations in tumor suppressing genes or oncogenes.”