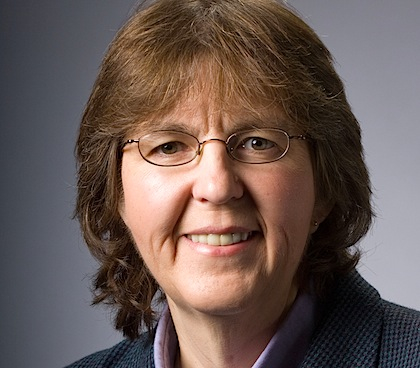 Now nearly three years later, Jaworski and colleagues have published their findings in two journals, including a paper in the January 6, 2014 International Journal of Cancer.

Jaworski’s research focuses on gliomas – brain tumors that originate in the glial cells of the brain – and developing therapies to treat these highly malignant tumors. In particular, patients with glioblastoma, which is the most aggressive type of these tumors and accounts for 80 percent of all gliomas, have a median survival of only 14 months. Even with treatments like surgery – not always an option – and radiation and chemotherapy, glioma stem cells are able to rapidly reform tumors. Jaworski and her fellow UVM neurological sciences faculty became closely familiar with this negative phenomenon when their late colleague Bruce Fonda, an anatomy lecturer, succumbed to the disease in 2005.

In the search for sorely-needed new therapies, Jaworski, Long and colleagues examined ASPA (aspartoacylase), an enzyme that breaks down a compound called N-acetyl-L-aspartate (NAA) into the amino acid aspartate and acetate. NAA is the brain’s primary storage form of acetate, which plays a critical role in allowing genes to be turned on and off.  In glioma, NAA levels and ASPA expression are decreased; thus, reducing acetate bioavailability.

“A hallmark of all cancers is global hypoacetylation,” explains Jaworski. “Most notably, the lack of acetate silences tumor suppressor genes, the ‘brakes’ that limit cell division.”

Long and Jaworski wondered if supplementing with NAA could increase ASPA expression, and acetate levels, thereby reducing proliferation. The results of their study, published in the Journal of Biological Chemistry were surprising. NAA and another source of acetate in the brain, N-acetylaspartylglutamate (NAAG), increased, rather than decreased, the proliferation of glioma stem cells. Hence, NAA, or NAAG, would not be an effective therapy.

Jaworski and Long were stumped. “Why was this therapy causing proliferation?” they wondered. The pivotal answer came to them in-flight: Adding more NAA will only generate acetate if ASPA is functional. “We needed another acetate source!” exclaims Jaworski. However, the additional source needed to be able to cross the blood-brain barrier and not require ASPA.

The key solution turned out to be an FDA-approved food additive – glyceryl triacetate (GTA) – used to treat Canavan disease, an inherited disorder that causes progressive damage to nerve cells in the brain.

“Children with Canavan disease die in infancy, because the glial cells that make myelin to cover nerve cells do not have enough acetate, since the NAA can’t be broken down due to an ASPA mutation,” says Jaworski.

A previous clinical trial using GTA, conducted by collaborators at the Uniformed Services University of the Health Sciences in Bethesda, Md., was fundamental to Jaworski’s pursuit of this avenue. “Their work found that both rodents and infants can tolerate GTA very well,” she says.

Within a few weeks back in the lab, they had the first promising results that GTA decreased the growth of glioma stem cells, but not normal brain cells, in culture. The next critical test would be to determine if GTA reduced the growth of brain tumors formed in mouse brains. With the help of Jeffrey Spees, Ph.D., associate professor of medicine and director of UVM’s Stem Cell Core Facility, glioma stem cells were infected with a virus to express luminescent enzymes called firefly luciferase. Utilizing highly sensitive imaging tools, tumor size and response to therapy can be tracked over time without euthanizing the mice. Andrew Tsen, M.D., a third-year Fletcher Allen neurosurgery resident performing research in the lab, grafted the tumor cells and analyzed tumor volume without knowledge of treatment. The group’s second aha moment came when the data were decoded and it was revealed that GTA increased the effectiveness of chemotherapy treatment and increased survival.

Few studies have investigated acetate as a potential therapeutic agent. Jaworski and colleague’s preclinical study, reported in the International Journal of Cancer article, focused on glioma therapy. Because almost all types of cancer cells have reduced acetate, Jaworski believes that GTA will not only be effective on glioma cells, but potentially other cancers.  Preliminary cell culture results support her hypothesis.

The team’s invention shows promise. In addition to its low risk of side effects and minimal toxicity to non-cancerous cells, GTA can be orally administered, is easily absorbed by the stomach and gastrointestinal tract, and is an established therapy for Canavan disease.  The next step is a Phase 1 clinical trial.

“The driving force for this project is the fond memories of my friend and colleague Bruce Fonda,” says Jaworski reflectively. “I often wonder, what if GTA was available for him? However, I must now focus on the fact that there are other patients receiving the dire diagnosis of glioblastoma every day and GTA may help them. It is through this work that Bruce’s legacy lives on.”

Information supplied by the UVM Office of Technology Commercialization was used in this article.