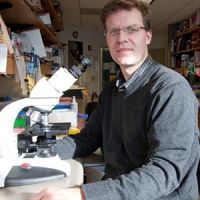 In a study published online February 23, 2014 in the journal Nature Cell Biology, researchers led by Matthias Hebrok, PhD, head of the UCSF Diabetes Center, reported the identification of a key gene that normally holds tumor development at bay but, when damaged by mutation, allows pancreatic tumors to develop.

In their latest study, the UCSF researchers used a new mouse model they bred especially to explore a mutated gene, called Brg1, or SMARCA4 in humans. They found that loss of the protein encoded by the gene – a result of genetic mutation – helps to trigger development of a type of pancreatic cancer thought to arise from cells lining the digestive-enzyme-secreting ducts of the pancreas. 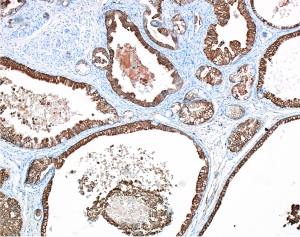 In cells that originate from pancreatic ducts, UCSF researchers

led by Matthais Hebrok, PhD, have found that mutations to the

Rapid advances in scientists’ ability to unravel genomes of both tumors and normal tissues have led to the discovery of many genes that are abnormal in certain cancers. However, not all of these abnormal mutations in cancer drive tumor growth, and the biological importance of many of these mutated genes awaits study in cells grown in the lab or in animal models.

Previous studies of pancreatic cancer often have focused on the role of a mutated protein called K-ras. K-ras is implicated in almost all cases of pancreatic cancer and is common in many other cancers. K-Ras has so far been notoriously difficult to target with new drugs, although UCSF researchers led by Kevan Shokat, PhD, recently identified a promising K-ras targeting strategy.

Hebrok’s team is exploring how other mutations – including Brg1 mutations — influence the development of pancreatic cancer in cells with mutated K-ras.

According to Hebrok, who studies both the normal and abnormal development of the pancreas, improved mouse models can help researchers sort out the different ways cancers can form within a single organ type. For instance, he and others have found evidence that pancreatic tumors that form from duct cells arise differently from those that arise from another type of pancreatic cell, called the acinar cell. The cancer type that arises from pancreatic duct cells has been less deadly when detected early.

“We are investigating preliminary evidence that pancreatic duct cells must lose their specialized characteristics, a process called de-differentiation, before they can become cancerous,” Hebrok said. “A K-ras mutation in a pancreatic duct cell cannot drive this process in a vacuum, but elimination of normally functioning Brg1 following K-ras mutation may drive tumor development.”

New models of pancreatic cancer, such as the one developed by Hebrok’s group, are valuable in pre-clinical studies of how new drugs might work in different subtypes of pancreatic cancer, and might lead to progress in developing treatments that are better tailored to individual patients, noted UCSF oncologist Eric Collisson, MD, who collaborates with Hebrok but who did not participate in the Nature Cell Biology study.

Cancer researchers previously identified scores of proteins in cancer that become over-active to drive tumor growth, and others that hold growth in check but that are lost in cancer. Brg1 acts at a higher level.

Within the cell’s chromosomes, genes normally are packaged and folded together with proteins into a material called chromatin. The Brg1 protein teams up with other proteins to cover or uncover genes within chromatin, and this accessibility helps determine whether genes may be turned on or off.

“Brg1 helps a cell decide which genes are translated into protein,” Collisson said. “We are hoping that new classes of drugs that target these genome readers might one day prove useful in fighting pancreatic cancer.”