For most young patients, visits will be brief and occasional. But physicians like Kate Matthay, MD, who runs the pediatric malignancies program, recognize that for some patients visits may be lengthy and frequent.

“The hospital is child friendly and family friendly, and that’s important because sick kids need their families close by,” said Matthay, who has been working at UCSF Benioff Children’s Hospital San Francisco since her fellowship in 1979 and is herself the parent of three adults. 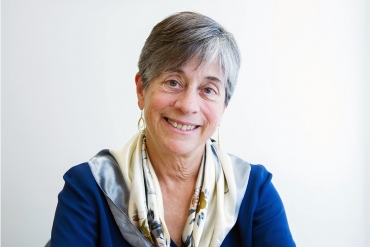 Kate Matthay’s research has helped reduce the amount of invasive treatment that children with rare pediatric cancers are exposed to. Photo by Susan Merrell 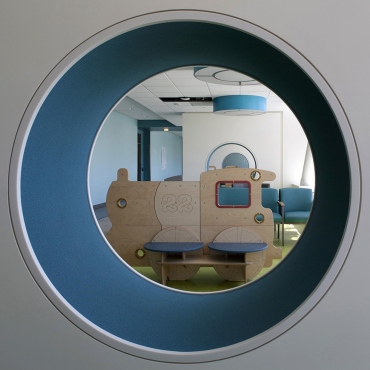 Different nooks throughout the children’s hospital are designed to intrigue and entertain.

Matthay is uniquely attuned to the needs of very sick children, because her patients include those with neuroblastoma, one of the most challenging pediatric cancers. Neuroblastoma is a rare malignancy of the nerve cells that usually starts in the adrenal glands, abdomen or near the spine by the chest or neck, spreading rapidly and aggressively in some patients. About 50 percent of patients present with advanced disease and require a bone-marrow transplant, follow-up therapy and lifelong specialized medical surveillance. Only 45 to 50 percent of patients over the age of 18 months with metastatic disease survive five years after diagnosis.

Matthay’s mission is twofold: She is committed to researching strategies that boost survival of neuroblastoma as well as other pediatric cancers with low cure rates; and she wants to identify the hallmarks of lower-risk disease that enable physicians to pare down treatment regimens, reducing side effects like hair loss, nausea and compromised immunity. More significantly, it will lower the risk of late effects, such as stunted growth, developmental delays and secondary cancers.

Matthay cites acute lymphoblastic leukemia (ALL), the most common and one of the most curable childhood cancers, as a roadmap for other cancers.

“We know that age and white blood count at the time of diagnosis are predictive of outcome for patients with ALL, but these factors don’t tell us the complete story,” she said.

So she’s been studying the genetic indicators that point to prognosis, like additions and deletions of extra chromosomes and genetic translocations.

“We give patients their first cycle of chemo and run their blood through a fluorescent flow cytometer, which tells us the number of leukemic cells found. This, together with information from their genetic profile, gives us a better idea about how to proceed with treatment,” said Matthay. Many patients have a predisposition toward cancer, such as a loss of a tumor-suppressor gene, she said.

“They are going to be susceptible to another cancer. When it comes to DNA-damaging agents like chemo and radiation, we must distinguish between those children who will relapse and require intensive treatment and not worry so much about late effects, and those who will survive and may need less therapy than we have given them,” she said.

Matthay’s research has helped redefine the treatment of neuroblastoma. Her name appears on groundbreaking studies that have shown infants with metastatic neuroblastoma with certain traits fare well with minimal therapy and that children with stage II neuroblastoma survive with surgery alone and do not require from chemo or radiation.

Her work has also highlighted the significance of the MYCN gene and the injection of a radioactive material called mIBG in predicting outcome and determining the most appropriate treatment regimen.

“Survival in metastatic neuroblastoma has increased from 10 to 15 percent when I first started working here to 45 to 50 percent. We’re extending survival even when we can’t cure it. We used to cure 40 to 50 percent of children with ALL, now it’s 80 to 90 percent. With osteosarcoma (bone cancer), it’s up from 20 to 30 percent to 60 to 70 percent,” said Matthay.

But what of those children whose futures fall on the wrong side of the success statistics? Matthay said she learned during her fellowship to process the deaths of her young patients in a way that has allowed her to continue her work and parent her own children. 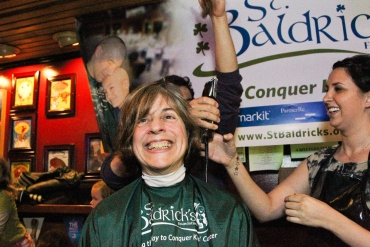 In 2011, Kate Matthay volunteered to have her head shaved to raise money for St. Baldrick’s Foundation in support of childhood cancer research. Photo by Susan Merrell 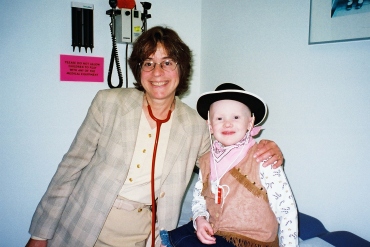 Matthay became quite close with Quincy Lee and her family during her treatment. Photo courtesy of the Lee family

Her patients and colleagues attest to her outstanding ability as a teacher, her compassion and empathy. In 2011 she was the only female to volunteer having her head shaved to raise funds for the St. Baldrick’s Foundation, a pediatric cancer nonprofit. She also participates in the cancer charity Swim Across America, which requires participants to be dropped off on a boat under the Golden Gate Bridge and swim a bracing mile-and-a-half to shore.

Lisa Lee remembers Matthay’s gentle reassurance when her 3-year-old daughter Quincy, who had rhabdomyosarcoma, a connective-tissue cancer, was transferred to her care back in 2001.

“After reviewing Quincy’s file, Dr. Matthay stated that she had hope. Three simple words that meant the world to us. We knew Quincy’s prognosis was dire, but we had a plan in place and the best doctor looking after her,” said Lee.

“Unfortunately, Quincy’s cancer could not be beaten, but Dr. Matthay did her best to make her comfortable at the end. She even drove out to our house after work one night to visit with Quincy and us,” she recalled.

“She became part of our family and grieved with us when Quincy died. She is a doctor with a brilliant mind and a big heart. The best there is.”

Where will children undergo surgeries?

As of Feb. 1, 2015, UCSF Benioff Children’s Hospital San Francisco will be at its new permanent location in Mission Bay at 1975 4th St. Both inpatient and outpatient surgeries will be performed here. 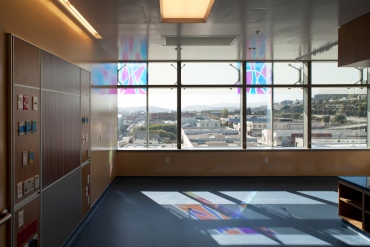 Dichromatic windows let in multicolored light of different textures into patient rooms depending on the time of day.

Where will the pediatric urgent care clinic be located after Feb. 1, 2015?

The urgent care clinic at UCSF Mount Zion remains open for children who are UCSF patients. For all other urgent and emergent needs, the emergency department at UCSF Benioff Children’s Hospital San Francisco will serve all children 24/7.

When will programs open at UCSF Medical Center at Mission Bay?

The pediatric clinics and outpatient programs will start to open on Monday, Jan. 26, 2015, and continue through the first week of February. Pediatric clinics will be transferred to UCSF Gateway Medical Building at 1825 4th St. These include the infusion center, pediatric dialysis and adolescent medicine. Some practices will maintain their existing locations at Mount Zion or Parnassus, in addition to opening a new clinic at UCSF Gateway Medical Building. These include orthotics and prosthetics, symptom management, psycho-oncology, cochlear implants, dermatology, and plastic and reconstructive surgery.