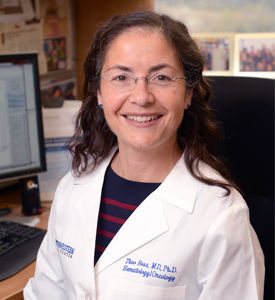 This is the first study that has used whole-genome sequencing to evaluate a series of 258 cancer patients’ genomes to improve the ability to diagnose cancer-predisposing mutations. The study is published online in the journal EBioMedicine.

“Whole-genome sequencing is a new genetic tool that can determine more of a person’s DNA sequence than ever before. Our results show that nearly 90 percent of clinically identified mutations were confidently detected and additional cancer gene mutations were discovered, which together with the decreasing costs associated with whole-genome sequencing means that this method will improve patient care, as well as lead to discovery of new cancer genes,” said Dr. Theodora Ross, Professor of Internal Medicine and Director of UT Southwestern’s Cancer Genetics Program.

The physicians and genetic counselors in UT Southwestern’s Cancer Genetics Clinic help patients assess their risk for many types of cancer, including kidney, skin, lung, breast, ovarian, colon, endocrine and prostate cancers. If a known genetic predisposition to cancer is found, Dr. Ross and her team counsel the patient about the best ways to detect early cancers or, better yet, prevent cancers from ever forming.

About 5 to 10 percent of all cancers are caused by known inherited gene mutations. These mutations are passed down from generation to generation. Mutations in the BRCA1 and BRCA2 genes are the most common cause of hereditary breast cancer. BRCA gene mutations are best known for their breast cancer risk, but they also cause increased risk for ovarian, prostate, pancreatic, and other cancers. In addition, there are many different genes, including ATM, CDH1, CHEK2, PALB2, PTEN, and TP53, that are associated with an increased risk for breast cancer, and researchers are continually discovering additional genes that may affect cancer predisposition.

In this study, researchers developed new methods to analyze the large amount of data generated by whole-genome sequencing. Specifically, Dr. Ross’ team devised a method to compare the group of patients with BRCA1 or BRCA2 mutations to a group of patients without BRCA mutations. All expected BRCA1 and BRCA2 mutations were detected in the BRCA group, with at least 88.6 percent of mutations confidently detected. In contrast, different cancer gene mutations were found in the cohort without BRCA mutations.

“Mystery patients are those who have a strong family history for cancer but after standard genetic testing, no genetic diagnoses are made. In our study, sequencing allowed us to discover novel candidate cancer gene mutations in mystery patients,” said Dr. Ross, who holds the Jeanne Ann Plitt Professorship in Breast Cancer Research and the H. Ben and Isabelle T. Decherd Chair in Internal Medicine, in Honor of Henry M. Winans, Sr., M.D.

Other UT Southwestern researchers involved in the work include co-first author Samantha Foley, Research Assistant; co-first author Dr. Jonathan Rios, who is Staff Scientist at the Sarah M. and Charles E. Seay Center for Musculoskeletal Research at Texas Scottish Rite Hospital for Children, Assistant Professor of Pediatrics and at the Eugene McDermott Center for Human Growth and Development at UT Southwestern; Dr. Victoria Mgbemena, Postdoctoral Researcher; Linda Robinson, Assistant Director of Cancer Genetics; and Leslie Durham, former Research Assistant, who is now a Genetic Counselling Assistant. The work was carried out in collaboration with the Department of Human Genetics at The Ohio State University.

The work was supported by the Burroughs Wellcome Fund Clinical Scientist Award, the Peter Bradley Carlson Charitable Trust, and the National Center for Advancing Translational Sciences of the National Institutes of Health.

UT Southwestern’s Cancer Genetics Clinic and Program is part of the Harold C. Simmons Cancer Center, the only National Cancer Institute-designated cancer center in North Texas and one of just 66 NCI-designated cancer centers in the nation. The Simmons Cancer Center includes 13 major cancer-care programs with a focus on treating the whole patient with innovative treatments, while fostering groundbreaking basic research that has the potential to improve patient care and prevent cancer worldwide. In addition, the Center’s education and training programs support and develop the next generation of cancer researchers and clinicians.

UT Southwestern, one of the premier academic medical centers in the nation, integrates pioneering biomedical research with exceptional clinical care and education. The institution’s faculty includes many distinguished members, including six who have been awarded Nobel Prizes since 1985. Numbering more than 2,700, the faculty is responsible for groundbreaking medical advances and is committed to translating science-driven research quickly to new clinical treatments. UT Southwestern physicians provide medical care in 40 specialties to nearly 91,000 hospitalized patients and oversee more than 2 million outpatient visits a year.