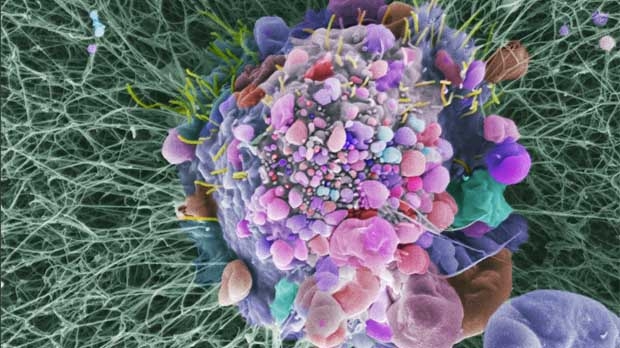 “It’s clear that the ‘safe haven’ offered by the surrounding cells is triggered as a response to the same drugs that target this class of melanoma. Knowing more about this relationship means we can start to improve treatment.” – Dr Erik Sahai, lead researcher

Around half of melanomas are caused by a mutation in a gene called BRAF. Drugs called BRAF inhibitors treat these melanomas by targeting the faulty gene. But these cancers can quickly develop resistance to these targeted treatments.

Scientists at the Francis Crick Institute, (link is external) funded by Cancer Research UK, and at the Cancer Research UK Manchester Institute (link is external) have discovered that a side effect of BRAF inhibitors is that they prompt healthy cells to form a ‘safe haven’ shielding melanoma cells from cancer drugs. So even if some cancer cells are destroyed, the protected cancer cells may survive – and the disease can recur in a form that is untreatable.

Carried out in cells in the laboratory, in mice and in samples from patients’ tumours, the researchers showed this ‘safe haven’ lets melanoma cells turn on a parallel set of cell signals that helps them survive.

By adding a second experimental drug that blocks this alternative survival route by targeting a protein called FAK, the researchers discovered that resistance to BRAF inhibitors can be overcome.

This combination of two drugs increased cell death and slowed growth in cell samples, and also stopped tumours from growing larger in mice.

Importantly, while not a cure, adding a second targeted therapy could help improve treatments by overcoming drug resistance and extending the time before the cancer returns.

FAK inhibitors are being tested on their own in early stage cancer clinical trials, but it will be some years before it is known if combining these drugs with BRAF inhibitors could help patients.

Study author Dr Erik Sahai, based at the Francis Crick Institute, said: “Skin cancers caused by a faulty BRAF gene typically out-manoeuvre the targeted drugs used to treat them after a few months. Clearly understanding this process is an important first step in improving treatment. We’ve now mapped how melanoma cells exploit their neighbouring cells to survive in the presence of targeted drugs. It’s clear that the ‘safe haven’ offered by the surrounding cells is triggered as a response to the same drugs that target this class of melanoma. Knowing more about this relationship means we can start to improve treatment.”

Co-author Professor Richard Marais, director of the Cancer Research UK Manchester Institute at The University of Manchester, said: “Understanding the complex behaviour of melanoma cells is vital to improving survival. This research helps explain what’s stopping the best drugs we have from working in this deadly skin cancer. This is early laboratory research and the next stage is to see if adding a second drug is safe and effective in patients. That said, we’re making progress, and as our questions are answered we’ll be able to develop and improve cancer treatments.”

Nell Barrie, Cancer Research UK’s senior science information manager, said: “This is an excellent piece of research that adds rich detail to our understanding of how melanoma cells develop resistance to drugs – and how we can tackle this head on. The researchers have worked through the issue with meticulous care to show not just how this happens, but how we can tackle the problem.

“Melanoma survival has been improving for the last 40 years and is now amongst the highest for any cancer. Overall, around nine in 10 people diagnosed with malignant melanoma now survive their disease for at least 10 years, so we’re making great progress, but we have so much more to do. We must develop better and more effective treatments to increase survival. As The Francis Crick Institute begins operation, we look forward to seeing more research like this to help us beat cancer sooner.”

The BRAF inhibitor used was PLX4720. This is an early version of vemurafenib.

For the latest statistics on melanoma visit http://www.cancerresearchuk.org/cancer-info/cancerstats/types/skin/

About the Francis Crick Institute

The Francis Crick Institute will be a world-leading centre of biomedical research and innovation. It will promote connections between researchers, between disciplines, and between academic institutions, healthcare organisations and businesses.  Dedicated to research excellence, the institute will have the scale, vision and expertise to tackle challenging scientific questions underpinning health and disease.
Due to open in 2015, the Francis Crick Institute is a charity supported by the Medical Research Council, Cancer Research UK, the Wellcome Trust, UCL (University College London), Imperial College London and King’s College London. It will be world-class with a strong national role – training scientists and developing ideas for public good. www.crick.ac.uk