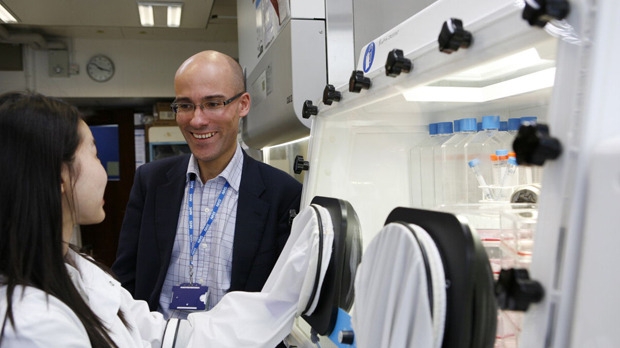 The findings begin to reveal patterns that are common in many cancer types and provide crucial evidence that, as cancer develops, the growth of the disease may rely on gene mutations present in only a small number of cells within the tumour. “I’m optimistic that we’ll one day be able to use evolutionary theory to outsmart many cancers” – Prof Charles Swanton

This uncovers vital clues explaining why tumours become resistant to treatment and suggests new strategies for tackling the problem.

The researchers trawled through publicly available data for over 2,500 tumours from The Cancer Genome Atlas (link is external) to study the variety of mutations, and the processes that trigger them, across nine common cancer types*.

Similar to looking at all the living members of a large, branching clan to work out how they might be related and which family they belong to, the researchers analysed the relative proportions of particular genetic faults in the data for each tumour sample. They compared how common each genetic fault was across the different tumour types to build up a picture of the sequence in which they were likely to have emerged during tumour development.

Certain faults known to be key drivers of cancer growth were found in all tumour cells, suggesting they happened early on in cancer development. While other mutations – including those that can be hit by the new generation of targeted drugs – affected a smaller proportion of the cancer cells, suggesting they were occurring later on.

Crucially, the team also discovered that the timing of various mutations, and the processes in a cancer cell that fuel them, often followed similar patterns across different tumour types.

For example, they found that later on in tumour development many cancer cells acquire a hyper-active protein called APOBEC, which allows cancer cells to sustain a much higher mutation rate than normal cells. The result is increased genetic diversity in the tumour, making it more difficult to treat and greatly increasing the chances of further mutations emerging that allow the disease to spread and become resistant to treatment.

Understanding which genetic faults are driving the growth and spread of disease at different time points could help develop new targeted drugs or drug combinations aimed at genetic changes present in all rather than just a minority of tumour cells. This could reveal ways of forcing tumours down an ‘evolutionary dead end’ that makes it much less likely resistant cancer cells will be left behind to carry on growing after treatment.

Professor Charles Swanton, study author at the Francis Crick Institute** and the UCL Cancer Institute (link is external), said: “Data from large-scale sequencing studies offer a snapshot of all the cells in a tumour at a particular moment in time. We have used a phenomenal public resource provided by the Cancer Genome Atlas in the USA to drill down further to work out how cancers change over time and to attempt to identify genetic events that in turn drive a tumour’s growth and ability to spread.

“This has enabled us to sift out some of the really important genetic faults occurring in all tumour cells from those that may play less of a role, or appear in only a few cells. It’s only the tip of the iceberg but I’m optimistic that we’ll one day be able to use evolutionary theory to outsmart many cancers, using carefully orchestrated combinations of drugs, and therapies that harness the body’s immune system, at key time points.”

Dr Kat Arney, Cancer Research UK’s science information manager, said: “At the moment it’s still difficult to treat cancers that have spread throughout the body, but this research provides hope that we might one day be able to predict cancer’s next evolutionary move and potentially find ways to block it. To find out more, we’re funding a major study called TRACERx that will delve deeper into the evolutionary history of lung tumours to give us an even clearer picture of how this might lead to urgently-needed new treatments.”