Nearly 40 percent of survey respondents said their loved ones did not discuss end-of-life care preferences with them. 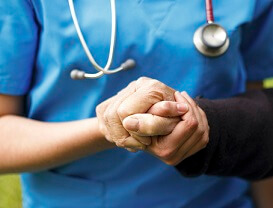 In a review of nearly 2,000 surveys with people whose loved ones died of cancer, researchers led by Johns Hopkins experts say they found a 40 percent increase over a 12-year period in the number of patients with cancer who participated in one form of advance care planning — designating durable power of attorney privileges to a loved one — but no corresponding impact on their rates of aggressive medical care received in the last weeks of life.
In addition, the investigators say that despite the substantial increase in patients who designated a durable power of attorney, nearly 40 percent of the survey respondents also said their loved ones did not discuss end-of-life care preferences with them.
“Although more cancer patients are assigning power of attorney privileges to someone they know and trust to make their medical decisions when they can’t, this practice may be the least helpful among advance care planning tactics because it may be least associated with treatment intensity at the end of life,” says Amol Narang, M.D., a resident in the Department of Radiation Oncology and Molecular Radiation Sciences at The Johns Hopkins Hospital.
The researchers report that patients who created living wills or had end-of-life discussions were twice as likely to limit or withhold certain treatments at the end of life. And although granting power of attorney did decrease the odds of terminally ill patients dying in the hospital as opposed to hospice or their home, it was not associated with treatment limitations.
Results of the survey review are published online July 9 in JAMA Oncology.
“We found that many cancer patients still do not communicate their preferences for end-of-life care, despite the potential benefits to patients’ quality of life and caregiver bereavement,” says Narang.
In addition to encouraging the use of durable power of attorney and living wills to ease medical decision-making when patients are very sick, oncologists, professional societies and other health care organizations have long supported end-of-life discussions among medical staff, patients and caregivers. The goal, experts say, is to understand the patient’s preferences and provide information about alternatives to aggressive care when the end of life is near.
In an effort to measure how often these practices occur and how effective they are in curbing useless or unwanted aggressive medical care at the end of life, Narang and his colleagues sifted through data collected for the National Institute on Aging’s Health and Retirement Study. The ongoing study gathers information on the health habits and wealth of more than 20,000 people over age 50. Of those study participants, 1,985 people died from cancer between 2000 and 2012, and had a completed “exit” survey by an individual who knew the study participant, often their next of kin.
Survey respondents reported that, overall, 48 percent of patients with cancer had completed a living will, 58 percent had designated a power of attorney and 62 percent had participated in end-of-life discussions. There were no significant changes in the use of living wills or end-of-life discussions during the 12-year period. However, more respondents reported that patients had a power of attorney in 2012 (74 percent) than when the study began in 2000 (54 percent).
The researchers also reviewed survey responses for information on whether patients who were terminally ill with cancer died in the hospital, had certain treatments, such as chemotherapy, limited or withheld in the last two weeks of life, or whether they received “all care possible” at the end of life. Survey results showed no changes in hospital-based deaths or treatment limitations during the study period, although the number of patients who received “all care possible” at the end of life increased from 7 percent in 2000 to 58 percent in 2012. Measures of aggressive medical care at the end of life were more common among African-Americans and Hispanics.
Among the exit survey respondents, 79 percent reported being the “primary” decision-maker in the patient’s medical care. The researchers found the same trends regardless of who completed the exit survey.
Narang cautions that there were limitations to the study, noting especially that the questions used in the survey were subjective, that answers could have been hampered by a respondent’s lapse in memory, or that answers could be biased by a respondent’s desire to meet social norms. “But we were looking at trends over time, so respondents’ bias would not likely change over time,” he says.
He says results of the survey do suggest the need to “find ways that prompt clinicians to have discussions with patients and caregivers about their end-of-life preferences.”
“We hope our findings renew efforts to encourage physicians and the public to have these critical end-of-life discussions,” says Narang.
Funding for the study was provided by the National Institutes of Health’s National Institute on Aging (K01AG041763) and the National Cancer Institute (K07CA166210).
In addition to Narang, Lauren Nicholas, Ph.D., from the Johns Hopkins Bloomberg School of Public Health and Alexi Wright, M.P.H., from the Dana-Farber Cancer Institute in Boston contributed to the study.