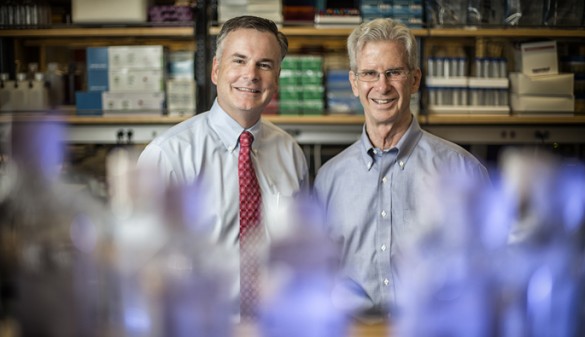 The findings, reported in the July issue of the Journal of Clinical Investigation, could suggest strategies for reducing colon cancer risk in these patients.

“Patients with Crohn’s colitis and ulcerative colitis have increased rates of colon cancer; it is diagnosed at a later stage, and it tends to respond poorly to therapy. We need a better understanding of what factors cause these patients to be at increased risk,” said Christopher Williams, M.D., Ph.D., associate professor of Medicine and Cancer Biology.

Williams and his colleagues explored the role of selenoprotein P (SEPP1) — a selenium-containing antioxidant protein — in intestinal biology, and how loss of the protein affects colitis-associated carcinoma. Graduate students Caitlyn Barrett, Ph.D., now a postdoctoral fellow at the University of Pittsburgh, and Vishruth Reddy, Ph.D., an MSTP student who is now completing his M.D., led the studies.

Mutations that disrupted either the selenium transport or the antioxidant enzyme domain of SEPP1 had similar effects, suggesting that both functions are important to SEPP1’s protective actions.

Williams and his team also used a sophisticated 3-dimensional cell culture system to further study SEPP1’s role in intestinal epithelial cells. They found that loss of SEPP1 in these “enteroid” cultures increased stem cell properties, including activity of the pro-tumorigenic WNT signaling pathway, and that in response to oxidative stress, loss of SEPP1 increased DNA damage.

Williams points out, however, that selenium supplementation might be beneficial for patients with selenium deficiency.

Studies in Australia and New Zealand have reported low levels of selenium in patients with IBD. An ongoing clinical trial in collaboration with Sarah Horst, M.D., and Raymond Burk, M.D., is measuring selenium and SEPP1 levels in plasma from patients at the Vanderbilt IBD center.

“If patients with IBD are selenium or SEPP1 deficient, they may be a population in which selenium supplementation does protect from colon cancer,” Williams said.

SEPP1 may also influence sporadic — not just inflammatory — colon tumorigenesis. Variations in the SEPP1 gene that reduce the protein’s expression are associated with the development of pre-malignant advanced adenomas. Williams plans to use mouse models to explore whether SEPP1 protects against polyp formation and colon cancer in general.

Burk, a major collaborator and author of the study, was named an emeritus professor of Medicine this year. His experience in studying selenium and selenoprotein biology for more than 40 years was invaluable to the research, Williams said. “He has been a fantastic collaborator and mentor to me over the years that I have been at Vanderbilt,” Williams said.