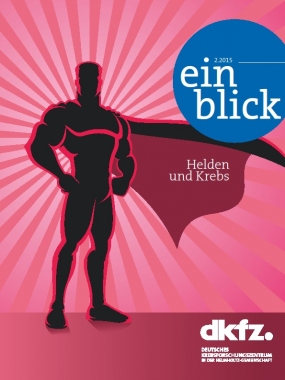 What possible relationship is there between Obi-Wan Kenobi and Wolverine and cancer? The actors who play these characters struggle against evil forces not only in their professional lives, but also privately. In the case of the superstar actors Ewan McGregor and Hugh Jackman, the enemy has been skin cancer: their chances of developing the disease are the same as anyone else’s. Fortunately, these two have won the fight. Jackman later posted messages on Twitter and Instagram in which he encouraged everyone to use sunscreen to protect themselves from UV damage to the skin. So even Wolverine says wear sunscreen! #pleasewearsunscreen.

Cancer can strike young people as well as superheroes. But why are children and adolescents susceptible to cancer in the first place? How good are their chances of being cured? Does or should their treatment differ from that of adults? Answers to these questions can be found in the latest issue of “einblick,” alongside portraits of some young people who have made the fight against cancer part of their work. In this issue two apprentices talk about their work as biology laboratory assistants at the DKFZ, while others report on their experiences abroad during internships all over Europe.

Dr. Lutz Breitling is another person from the DKFZ who recently worked abroad when he traveled to treat patients in Bangladesh and the Philippines as a volunteer for German Doctors. Poor people living in remote areas often cannot afford the trip to see a doctor. The organization reaches out to them by providing a “rolling clinic” – Breitling worked as part of its team. His missions in Asia have shown for him that individuals can make a big difference even when faced with limited resources.

Other topics covered in the issue include: