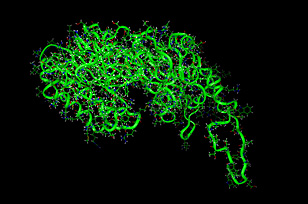 Computer model of the enzyme methyltransferase

Chemical changes in the genetic material, known as epigenetic modifications, regulate the activity of many genes. Thus, attachment of methyl groups to DNA often inactivates important cellular growth brakes. Therefore, this process called methylation is believed to be a major cause of uncontrolled division of cancer cells. Specific enzymes, the DNA methyltransferases, are responsible for methylation.

Unlike changes in the blueprint of the genetic material, epigenetic mutations are reversible and, thus, cancer cells can be restored to their “normal state”. Substances causing this re-programming are already being used as anticancer drugs. Examples are azacytidine and decitabine, which are used in the treatment of a specific type of blood cancer called acute myeloid leukemia. Both substances are incorporated into the cell’s genetic material, where they act as a trap for methyltransferases. They form permanent chemical bonds with the enzyme, thereby catching the methyltransferases one by one, so that no more genes are being silenced.

Scientists in Professor Frank Lyko’s team at DKFZ were searching for azacytidine variants with enhanced efficacy, because the drug still remains ineffective in many cases even when it is has been established that tumor brakes have been put out of effect by methylation. Researchers believe that this therapy resistance is frequently caused by the fact that not enough of the agent gets into the interior of the cells, because cancer cells lack particular transport molecules in the cell membrane.

The Norwegian company Clavis Pharma produced the azacytidine variants with modified chemical properties. Among the substances studied was CP-4200, a coupled product of azacytidine and a fatty acid (elaidic acid). CP-4200 showed particularly good results. When cancer cells in the culture dish are treated with CP-4200, the amount of methyltransferase molecules in the interior of the cells is reduced. At the same time, the methyl groups bound to the DNA of cancer cells disappear and silenced tumor brakes are reactivated. The investigators assume that the elaidic acid makes it possible even for cells without special transport proteins to take up CP-4200; the substance might reach the cell interior directly through the membrane.

The effectiveness of azacytidine was previously proven only for acute myeloid leukemia. To find out whether CP-4200 shows an increased efficacy range, the investigators compared the two substances in mice suffering from another form of blood cancer, acute lymphocytic leukemia. In all treatment tests investigated, the effectiveness of CP-4200 was superior to that of azacytidine. “Coupling to elaidic acid improves the bioavailability of the agent without impeding its epigenetic effect,” explains project leader Frank Lyko.”Therefore, we see chances of reversing methylation in far more cancer patients in the future and arresting tumor growth in this way.”

A picture is available on the Internet at
www.dkfz.de/de/presse/pressemitteilungen/2010/images/E3_Methyltransferase.jpg