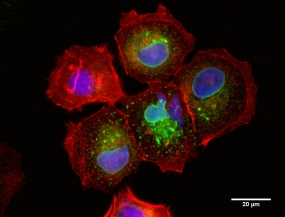 “Although the group of hormone receptor-positive tumors has a better prognosis than other breast cancers, they are responsible for many deaths simply because of their frequency,” explains Sven Diederichs of the German Cancer Research Center. “To find new ways to treat breast cancer, we first need to understand exactly how the tumor cells work. So far, our knowledge about the development and progression of the disease is not enough to treat it optimally, “he emphasizes.

Microproteins have not been known for a long time. To produce a microprotein, the cell reads genetic material that has long been thought to contain no protein instructions. “Molecular biology databases are teeming with these supposedly noncoding RNA molecules, which are sometimes used by the cells to produce small proteins,” Diederichs says.

In recent years, microproteins have been found to play a role in muscle development and cardiovascular disease. The microprotein CASIMO1, which was discovered by the DKFZ researchers and consists of just 83 amino acids, is the first to show any function in cancer.

CASIMO1 is present in breast cancer cells, especially of hormone receptor-positive tumors, in high concentration. The underlying gene is used extensively for protein production. In experiments on cell cultures, the scientists around Diederichs switched off the CASIMO1 gene. This demonstrated the importance of CASIMO1 for the survival of breast cancer cells: The lack of the microprotein interrupted the cell cycle of the breast cancer cells and thus inhibited their growth.

Next, the DKFZ scientists want to examine other microproteins that they have already found in patients with breast cancer or lung cancer. “The long-term hope is to be able to use these small proteins as therapeutic targets and to inhibit them with drugs,” says Diederichs.