Researchers at University of Copenhagen have gained more insight into the molecular mechanisms of importance for, for example, cancer cell growth and metastasis. The research objective is improved and more targeted drugs. The findings have just been published in the scientific journal Molecular Cell

Researchers are constantly trying to learn more about the body’s advanced communication processes. Receptors serve as a kind of switchboard in the cell, which connects specific signaling proteins to specific cellular functions. Using state-of-the-art technology, researchers at University of Copenhagen have studied a special cell surface receptor of major importance for health and disease. The findings have been published in a new scientific paper: 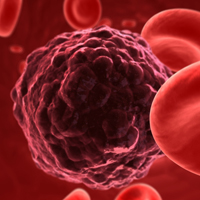 “We have pinpointed the binding site that can cause increased spreading of breast cancer cells and thus the development of metastases,” says professor Jesper Velgaard Olsen.

“In simple terms, we have mapped the molecular switch on the receptor that turns two important biological processes on and off, respectively. We have, in other words, pinpointed the binding site that can cause increased spreading of breast cancer cells and thus the development of metastases.

We have studied two cellular signaling proteins with each their widely different biological influence on the so-called FGFR2b receptor. One of the proteins is involved in cell division, whereas the other controls cell movement. Both processes are important for a healthy cell, but if they spin out of control it may have serious implications, e.g. in the form of cancer cell growth and development of metastases,”says Professor and protein researcher Jesper Velgaard Olsen, The Novo Nordisk Foundation Center for Protein Research, University of Copenhagen.

The findings have just been published in the scientific journal Molecular Cell.

The FGFR2b receptor is co-responsible for the optimal development of inner organs at the embryonic stage, in particular lung tissue. A dysfunction in the receptor’s signal therefore has serious implications for normal lung tissue function. The receptor has also proved to play an important role in certain types of breast cancer.

Better drugs in the future

The new research is based on human cancer cells and murine tissue but may, in the long run, help improve the customised treatment of, e.g., breast cancer in humans: 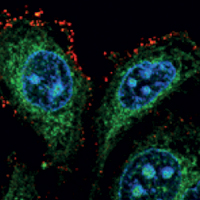 The FGFR2b receptor has proved to play an important role in certain types of breast cancer – in this image the receptor is red.

“Doctors currently use special biomarkers for diagnosing and treating cancers. The FGFR2b receptor may in the future serve as a new biomarker. The more we know about the body’s transmission systems, the better we become at targeting medical treatment. Hopefully, we will in future be able to offer customised treatment based on the individual patient’s cellular profile,” says Professor Jesper Velgaard Olsen.

The researchers have used state-of-the-art technology within protein research at The Novo Nordisk Foundation Center for Protein Research:

“Using advanced mass spectrometry allows us to study cellular proteins in such detail that was previously only possible within the field of genetics. It was previously a huge challenge to analyze proteins – but today we can study thousands of proteins in a very short time”, says Professor Jesper Velgaard Olsen.