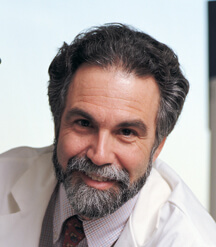 Working with mice, Johns Hopkins researchers report they have identified chemical signals that certain breast cancers use to recruit two types of normal cells needed for the cancers’ spread. A description of the findings appears in the online early May edition of the Proceedings of the National Academy of Sciences.

“Blocking one of these cell-recruiting signals in a mouse’s tumor made it much less likely to metastasize or spread,” says Gregg Semenza, M.D., Ph.D., a professor and director of the Vascular Biology Program in the Johns Hopkins University School of Medicine’s Institute for Cell Engineering. “If a drug can be found that safely blocks the same signal in humans, it could be a very useful addition to current breast cancer treatment — particularly for patients with chemotherapy-resistant tumors.”

Semenza’s research group studies a chemical signal called hypoxia-inducible factor 1 (HIF-1), which cells release to help them cope with low-oxygen conditions. Earlier, the group determined that HIF-1 helps breast tumor cells survive the low-oxygen conditions in which they often live, and spread to other parts of the body such as the lungs. “In breast cancer, it’s not the original tumor that kills patients, but the metastases,” says Semenza.

Also in a previous study, Semenza’s group found that HIF-1 induced adult stem cells called mesenchymal stem cells release a signal to nearby breast cancer cells, which made them more likely to spread. The researchers suspected this communication might run both ways and that the stem cells’ presence might also help the cancer to recruit the host animal’s white blood cells. Breast cancers need the support of several types of host cells in order to metastasize, including mesenchymal stem cells and one type of white blood cell, Semenza notes.

Studying tumor cells grown in a dish, Semenza’s team used chemicals that blocked the functions of various proteins to map a web of signals flying among breast cancer cells, menenchymal stem cells and white blood cells. One positive feedback loop brought mesenchymal stem cells close in to the breast cancer cells. A separate loop of signals between the stem cells and cancer cells caused the cancer cells to release a chemical “beacon” that drew in white blood cells. The concentrations of all the signals in the web were increased by the presence of HIF-1 — and ultimately, by low-oxygen conditions.

The team then used genetic engineering to reduce the levels of the cell-recruiting signals in breast cancer cells and implanted those cells into female mice. Compared with unaltered breast cancer cells, those with reduced recruiting power grew into similar-sized tumors, Semenza says, but were much less likely to spread.

Other authors on this paper were Pallavi Chaturvedi, Daniele M. Gilkes and Naoharu Takano, all of the Johns Hopkins University School of Medicine.

The study was funded by the American Cancer Society and the National Cancer Institute (grant number CA143868-05).