A vaccine against cervical cancer for poor countries

A novel vaccine against cancer-causing human papillomaviruses (HPV) is intended to help raise vaccination rates especially in developing countries. To this end, scientists from the German Cancer Research Center (DKFZ) in Heidelberg are developing a completely new vaccination concept based on a low-cost vaccine that protects from almost all known oncogenic HPV types. The project has now been chosen for funding from the Helmholtz Validation Fund. The Helmholtz Association uses this fund to support promising research projects on their way to marketable applications. 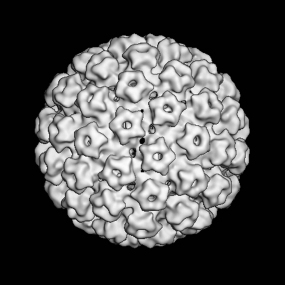 Model of a human papillomavirus © DKFZ

Cervical cancer, which is caused by human papillomaviruses (HPV), is the third most frequent cancer in women worldwide. More than 80 percent of cervical cancer cases are diagnosed in developing countries, mainly in Africa and South America. Although currently available vaccines are efficient, they also have drawbacks: They are thermosensitive and therefore require uninterrupted cold-chain storage and transportation. In some countries, this is a logistic problem. In addition, their production is laborious and costly and they protect only against some of the cancer-causing HPV types.

“Our big goal is to increase vaccination rates against HPV worldwide, particularly in low-resource countries,” said DKFZ’s Martin Müller. “Our new thermostable vaccine, which has low production costs and protects against all oncogenic HPV types, is a first, major step towards this goal.”

“The money from the Helmholtz Validation Fund is an important support in order to advance this project to marketability,” commented DKFZ’s Chairman and Scientific Director, Michael Baumann. “We thereby contribute to making this protective vaccination better available in countries where it is most urgently needed.”

The vaccination approach developed by Müller differs considerably from currently available vaccines. Müller chose the viral L2 protein as a starting point for the vaccine. This protein is identical in all oncogenic HPV types. However, it fails to elicit a strong immune protection. Therefore, Müller used a bacterial molecule as a scaffold to which he coupled the HPV protein in order to increase its immunogenicity. The fusion product is produced in E.coli bacteria. The trick behind this approach is that the scaffold molecule originates from an extremely thermostable archaebacterium. “Therefore, we can very easily purify the vaccination protein at high temperatures; all other E.coli proteins die in the process,” said Müller about the advantages of the new method.

The financial support from the Helmholtz Validation Fund will now be used to manufacture the vaccine in pharmaceutical quality and test it in a phase 1 clinical trial. To this end, the DKFZ virologists are collaborating with renowned experts at the Moffitt Cancer Center in Florida, U.S.A. Their goal is to validate the vaccine’s tolerability and to examine whether it stimulates the production of protective antibodies in humans.

“Once clinical testing of the vaccine is successfully completed, we will have to give the project into other hands,” Müller said. “For a research institution like the DKFZ, it is impossible to advance vaccine development without an industrial partner.” Since the vaccine candidate will have major advantages particularly for the poorer countries of the world, it is also possible that a nonprofit institution such as the WHO can be gained as a sponsor. “The main thing for us is that the vaccine will be developed to marketability and used for the benefit of women all over the world.”

Funded from the Helmholtz President’s Initiative and Networking Fund, almost €30 million will be available for projects in the Helmholtz Association’s Validation Fund until 2020. In addition, the Helmholtz Centers will contribute a similar amount to the innovative projects. In this year’s two rounds of calls for proposals, seven projects were chosen for funding. These projects will receive funds totaling €9.1 million by 2019. The vaccine project will receive funds amounting to €2.6 million.

A picture for this press release is available at:
http://www.dkfz.de/de/presse/pressemitteilungen/2017/bilder/hpv-modell.jpg
Picture Caption: Model of a human papillomavirus

Note on use of images related to press releases
Use is free of charge. The German Cancer Research Center (Deutsches Krebsforschungszentrum, DKFZ) permits one-time use in the context of reporting about the topic covered in the press release. Images have to be cited as follows: “Source: DKFZ”.
Distribution of images to third parties is not permitted unless prior consent has been obtained from DKFZ’s Press Office (phone: ++49-(0)6221 42 2854, E-mail: [email protected]). Any commercial use is prohibited.