The team of María Domínguez, researcher for the Neuroscience Institute, joint venture of the Miguel Hernández University (UMH) in Elche and the Spanish National Research Council (CSIC), has managed to prove for the first time that an important factor in the development of acute paediatric lymphoblastic leukaemia is inflammation. Moreover, researchers have readied a screening system in order to choose the medicines which are already being used to fight inflammatory processes which could be effective against this type of childhood cancer and without side effects. 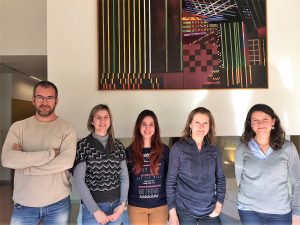 María Domínguez’s team has been working for six years to find medicines with fewer side effects than those currently available, but with the same effectiveness for fighting acute paediatric lymphoblastic leukaemia. This work is already proving useful, as they have explained in an article published by specialised journal Cell Reports. A joint project with the Scientific Foundation of the Spanish Association Against Cancer (AECC) will allow them to delve deeper into this discovery and look into other medicines identified in this study as clinically useful for inflammatory illnesses.

The study has made it possible to discover new aspects of the tumour and to develop a screening platform which will allow them to progress faster in the search for more efficient and safer medication for this illness, which could also be extended to other types of cancer. Acute lymphoblastic leukaemia is the most common cancer amongst children and represents approximately 25% of all diagnoses in children under the age of 15. Although survival rate is high, approximately 90%, side effects of the treatment can last months or years once this blood cancer is overcome. Furthermore, an estimated 20% of cases don’t improve with treatment.

Researcher Domínguez, who heads the Development Neurobiology Department of the Neuroscience Institute, explains that ‘what was missing was a type of screening to test thousands of molecules which would also make it possible to see its impact on the tumour and healthy cells, as well as to validate that what was being observed on animals was also related to the illness on humans. Now that we have noticeably optimised the system and obtained proof of concept to prove this is possible, we can advance faster in the search for efficient, safer medication and apply them to other oncogenes and cancers.’

The Notch gene is part of one of the more complex cancer pathways and plays a vital role in the normal development of a majority of the organism’s tissues such as skin, intestines or the immune system. This is why medication against the Notch pathway will cause side effects in healthy cells as they fight the tumour. Efforts are currently taking place to improve experimental medication against Notch and reduce the side effects, or to develop alternate strategies to those inhibitors. “One alternative is to optimise medication that has already been tested on children for other uses, with proven safety, to reuse them in treatments against cancer. To do so, one important requisite was to have a biological system that allowed us to test medicine quickly, cheaply and predictively such as the one we have prepared, which also makes it possible to see its efficacy against tumour cells and possible adverse effects on healthy cells,” Domínguez added.

The immune system is always searching for damaged or abnormal cells, and is able to detect and destroy incipient tumour cells that may appear. However, the inflammation induced by the PI3K kinase, completely hidden from these cells, gives them an ‘invisibility cloak’ of sorts which keeps the immune system from detecting them. In these favourable conditions, activation of the second oncogene, Notch, is enough to induce the development of the tumour. The new screening system developed in the laboratory by researcher Domínguez has proved that many of the tested medicines worked by reversing the inflammation.

There is evidence that treatment for inflammatory processes such as asthma can be beneficial for fighting chronic lymphoblastic leukaemia in adults. However, given that children can have differences in their immune system and in their physiological features compared to adults, it will still take some time to apply these findings to paediatric patients.