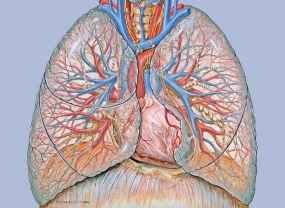 In the United States the National Lung Cancer Screening Trial (NLST) showed that annual lung cancer screening of high-risk individuals with LDCT reduces lung cancer mortality by 20% and overall mortality by 7%. There are now multiple lung cancer screening trials ongoing throughout the world, but one concern is the high number of early repeat scans for suspicious findings that are in fact not lung cancer. This high number of false positives could make screening impractical due to cost, invasive follow-up procedures, and anxiety for the patients.

The LUSI is comparing no intervention (n=2023) to 5 annual screens of individuals’ aged 50-69 with a history of heavy tobacco smoking (n=2029). All the participants have been followed for at least 3 years but many have been followed for 5 years. The control arm is tracked with an annual questionnaire and query of cancer registries. The LUSI is ongoing but the current analyses compare the first screening round to subsequent rounds with regard to performance indicators, such as early recall rate, detection rate, and interval cancer rate.

The results published in the Journal of Thoracic Oncology, the official journal of the International Association for the Study of Lung Cancer, show that there was a strong decline in the early recall rate from 20% in the first screening round to 3-4% in rounds 2-4. The detection of lung cancer was 1.1% in the first round but then declined to 0.5%, on average, for the subsequent rounds. The cumulative number of advanced lung cancers was almost identical between the control and intervention groups for the first two years but by year three the number of advanced cancers in the screening group began to decline. The same trend was observed for the overall mortality.

“Our data indicate that the most prominent side effect “false positive alarm” cannot be controlled if the choice of doctor is at the screenee’s discretion at every annual screening visit. The early recall rates of rounds 2-4 would have been around 30%, instead of 3-4%, if the prior scans were not available. Thus, a potential lung cancer screening program must be organized such that all previous images and results are available,” concludes Nikolaus Becker, head of the study.