Late-preterm babies at greater risk for problems later in childhood 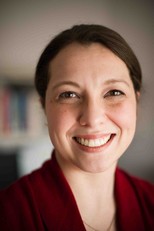 Nicole Talge is a post-doctoral research associate in MSU’s Department of Epidemiology. Photo by G.L. Kohuth.

Click on an image to view a larger or high-resolution version.

While late-preterm births (full-term pregnancies last at least 37 weeks) have been associated with such problems before, the study represents one of the most rigorous looks at the issue by accounting for other potential causes, said the study’s lead author, Nicole Talge, a postdoctoral research associate in MSU’s Department of Epidemiology.

“Previous studies reveal that babies born a little early are at-risk for short-term medical problems and possibly long-term behavioral and cognitive problems,” Talge said. “We wanted to look at a diverse population of children and take into account important factors such as maternal IQ and birth weight for gestational age; do the previously reported associations still hold up?

“We found late-preterm babies are between two and three times more likely at age 6 to have lower IQs as well as higher levels of attention problems and symptoms of anxious, withdrawn behavior.”

Talge stressed that not all babies born late-preterm experience problems and that further research is needed into exactly what is contributing to the increase.

As part of the National Institutes of Health-funded study, researchers analyzed a cohort developed by Naomi Breslau, a professor in MSU’s Department of Epidemiology. Data on babies born between 1983 and 1985 in both urban and suburban settings in southeast Michigan were analyzed and compared with data collected when the children were 6 years old.

For each late-preterm baby analyzed, a full-term counterpart was randomly identified as part of a control group, taking into account birth weight for gestational age.

“Children born late-preterm exhibited lower levels of cognitive performance and higher levels of behavioral problems at the age of 6 even after accounting for socioeconomic factors and maternal IQs,” Talge said. “We want to find out what explains these associations: Why are some late-preterm babies at risk and others are not? Could it be the presence of obstetric complications, neonatal complications, postnatal factors such as feeding choice or some combination of these factors?

“We are looking into these possibilities in follow-up investigations.”

In addition, the increased risk was found at age 6; since children are still developing at that age it is important to see if and how these associations persist later in life.

It’s important to find these answers as more children are being born late-preterm: The rate of such delivery has risen 20 percent since 1990. While there is debate as to why that is occurring, Talge said, the impact it is having needs to be addressed.

Other researchers taking part in the study include Claudia Holzman, Joseph Gardiner and Jianling Wang from MSU’s Department of Epidemiology, part of the College of Human Medicine, and Victoria Lucia from William Beaumont Hospital in Royal Oak.

Michigan State University has been advancing knowledge and transforming lives through innovative teaching, research and outreach for more than 150 years. MSU is known internationally as a major public university with global reach and extraordinary impact. Its 17 degree-granting colleges attract scholars worldwide who are interested in combining education with practical problem solving.