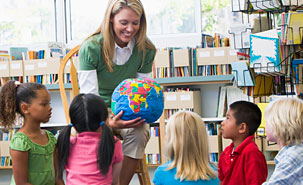 The findings, published in The Journal of Child Psychology and Psychiatry, have implications for families struggling to get by.

“There is a positive correlation between having a child attend daycare and performance on cognitive tests such as receptive vocabulary (understanding spoken words), reading and math,” says Université de Montréal former graduate student Marie-Claude Geoffroy, principle author of the study.

Seven-year study
Geoffroy and her colleagues examined the performance of 2,000 children born in Quebec in between 1997 and 1998 for seven years.

“Although it’s difficult to draw definitive cause and effect conclusions, our research shows that daycare helped disadvantaged children compensate for what they lacked at home and better prepare for school,” says Université de Montréal professor Jean Seguin, the study senior author.

The study also highlighted that “informal” babysitting by either a member of the extended family or a babysitter had benefits for children of poorly educated mothers. “The effects go beyond the preschool years,” says Geoffroy. “They are observed in several cognitive indicators at age six and seven.”

In 2007, Geoffroy published a study demonstrating that children from disadvantaged households had better receptive vocabulary at age four if they were babysat full-time during the first year of life.

CPEs a good choice
The Centre de la Petite Enfance (CPE) subsidized by the Quebec government ($7/day) is a promising, low-cost, and accessible option, according to Geoffroy. Despite the lack of space in CPEs, these daycare centers truly benefit disadvantaged children.

Partners in research
This study was funded by the Canadian Institutes of Health Research.